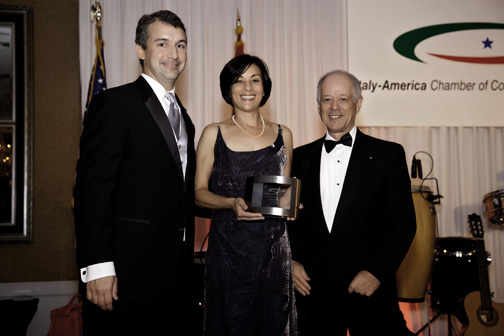 The Wolfsonian was recognized by the Italy-America Chamber of Commerce Southeast (IACCSE) as both having made a major impact on the cultural landscape of South Florida and being a strong supporter of the IACCSE. The occasion was the IACCSE’s celebration of its twentieth anniversary on April 8, 2011, commemorated by a gala at the Coral Gables Country Club. The IACCSE’s role is to coordinate and facilitate commercial and intellectual exchange between Italy and the Southeastern United States. “We are so pleased to be formally recognized by the Italy-America Chamber, which is doing such important work in fostering collaboration between Italy and organizations in the Southeast,” says Cathy Leff, director of The Wolfsonian. “We’ve been great fans of the Chamber throughout our history, and we’ve been privileged to work with them on some exciting projects involving Italian art, design, and history.” The Wolfsonian has an extensive collection of Italian materials that have been on view in several exhibitions and will be the focus of the upcoming exhibit Exporting Italy, organized in conjunction with the Wolfsoniana in Genoa, Italy. Past exhibitions that have focused on or incorporated Italian design and design movements include last season’s Speed Limits, which commemorated the one hundredth anniversary of Italian Futurism, DeperoFuturista Rome-Paris-New York, 1915-1932, and Stile Floreale: The Cult of Nature in Italian Design.