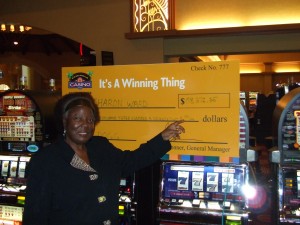 Sharon W. of West Palm Beach hit the Big Dogg Bonus free play jackpot at Seminole Casino Coconut Creek on Jan. 20 for $58,372.35, bringing the number of winners of this ongoing slot promotion at the South Florida Seminole casinos to a dozen, and total awarded to $956,988.

The very first time the Big Dogg Bonus sniffed out a winner was also at Seminole Casino Coconut Creek on Aug. 11 when a woman from Port St. Lucie hit for $86,693.42 in free casino play. Now that the Big Dogg has bitten again, the bonus was reset at $50,000 and has begun accumulating again to a maximum of $100,000 in free play.