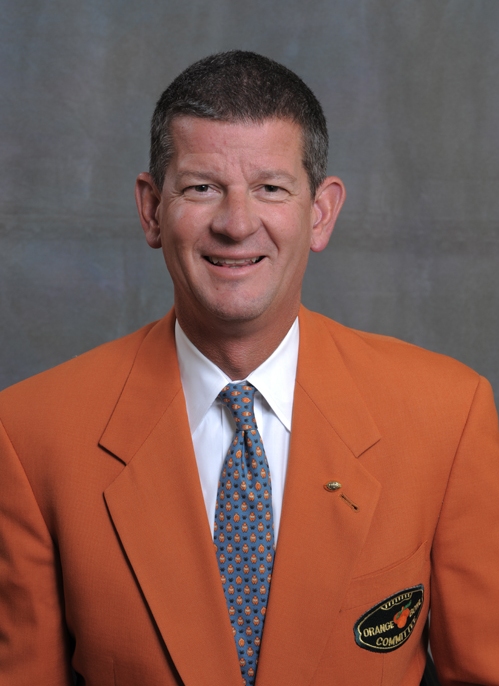 Jeffrey T. Roberts was installed as the Orange Bowl Committee’s (OBC) new President and Chairman of the Board during an evening reception last night at Riviera Country Club in Coral Gables.  Entering his 15th year of service, Roberts succeeds Immediate Past President Antonio L. Argiz as the 73rd President of the Orange Bowl Committee.    Under his leadership, Roberts will oversee the Committee’s continued mission to drive tourism and economic growth for South Florida, while serving as a key benefactor to over 16,000 youth on an annual basis.  In addition, he will also preside over the 2011-12 Orange Bowl Festival which includes the 2012 Discover Orange Bowl, 18th Annual MetroPCS Basketball Classic and a collection of entertainment, family and youth sports events.      “Understanding not only the current climate of college athletics, but of South Florida from both an economic and communal perspective, I look forward to engaging the Committee as we continue to raise the stature of the Orange Bowl and its events on both a local and national level,” said Roberts, who was elected to the OBC in 1996. “I believe that it is our fundamental duty to benefit this community which we are so proud to be a part of, reminding people the Orange Bowl is more than just a football game.”     O. Ford Gibson moves into Roberts’ previous role as Chairman-Elect and will serve as the 74th President & Chairman during the 2012-13 year, which will include the 2013 Discover BCS National Championship Game.  Andrew P. Hertz will serve as First Vice-Chair and will become President & Chairman of the 2013-14 Orange Bowl Festival.  Eric L. Poms enters his sixth year as the Chief Executive Officer and marks his 19th year overall with the Committee.    Poms added, “Building upon community programs such as the recent unveiling of Orange Bowl Field at Moore Park and the enhancement of entertainment properties such as Orange Drive, under Jeff Roberts’ guidance I expect the Orange Bowl Committee to have an exciting year leading up to our turn as host to the BCS National Championship game.”   Jeffrey T. Roberts currently is a Vice President at Goldman Sachs in Miami, Florida, joining the investment bank 25 years ago after receiving his M.B.A. from Harvard Business School.  In addition to his position at the Orange Bowl Committee, he serves on the board of several other notable local organizations including the New World Symphony, Center for Ethics in Public Service at the University of Miami, and as Chairman of the Board of Trustees at Ransom Everglades School.  Roberts is also a past recipient of the Goldman Sachs Equities Division Community Service Award.  He lives in Coral Gables with his wife Laura and four children, Andrew, Amanda, Sarah and Abigail.