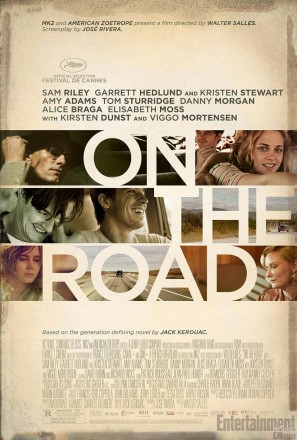 *Reading the Beats event is at: Books & Books, which is located directly across the street from the Gables Cinema at 265 Aragon Avenue, in Coral Gables

*Tickets for screenings are $11.50 and under at the box office and on the Cinema’s website at www.gablescinema.com

*Reading the Beats is free and open to the public

Starting Friday, April 5, the Coral Gables Art Cinema presents the Exclusive Miami First Run Engagement of On The Road, in 2K Digital Cinema Projection. Based on Jack Kerouac’s classic American cult Beat-era novel of the same name, it is brought to the screen by the great  director Walter Salles (The Motorcycle Diaries). The film follows an aspiring New York writer and his friendship with a devastatingly charming ex-con from the Midwest in the 1950s, as the two embark on a series of jazz-inflected road trips that take them across the length and breadth of the United States.

Reading the Beats is a free event on Tuesday, April 2, at 6:30 pm at the Cinema’s neighbor and partner, Books & Books, 265 Aragon Avenue in Coral Gables. In honor of the upcoming film adaptation of Jack Kerouac’s classic novel On the Road, South Florida writers will read excerpts from some of their favorite Beat-era poetry and prose. After the literary fun, join us for a drink or a bite in the bookstore’s courtyard and listen to the jazz music from the movie’s soundtrack.

On the Road is a portrait of a generation not afraid of breaking rules in their search for meaning. Captured in stunning and evocative wide-screen cinematography, the film is both a pean to the era it evokes as well as America itself, in all its beauty and gritty reality, and based on the real-life characters of Keorouac, Neal Cassady, Allen Ginsberg and others. On the Road‘s powerhouse cast includes Kristen Stewart, in a mold-breaking role; Garrett Hedlund; Sam Riley; Amy Adams; Viggo Mortensen; and Kirsten Dunst. The Los Angeles Times raves, “Salles has

lovingly crafted a poetic, sensitive, achingly romantic version of the Kerouac book that captures the evanescence of its characters’ existence and the purity of their rebellious hunger for the essence of life.”

Gables Cinema Director Robert Rosenberg says, “This is a dreamy, sexy, impressionist film, filled with young actors each lighting up the screen, capturing the feel and time of the Beat poets and writers who now form part of the pantheon of American literature.” Tickets for all screenings are $11.50 and under and are available for purchase in advance  on the Cinema’s website at www.gablescinema.com or in person at the box office during regular screening hours. For more information visit the website or the Cinema’s Facebook page,   www.facebook/gablescinema, or contact the Cinema at info@gablescinema.com or (786) 385-9689. Screen times will be announced shortly.

The Coral Gables Art Cinema is South Florida’s leading state-of-the-art venue for experiencing independent, alternative and international film, offering first-run, seven-day-a-week showcase presentations in both 35mm and true industry-standard theater quality digital projection. It is located at 260 Aragon Avenue, directly across the street from Books & Books, on the western end of the ground floor of the Museum Parking Garage.

Funding for the Coral Gables Art Cinema comes in part from the City of Coral Gables; the Coral Gables Community Foundation and its Perrin Fund; the Knight Foundation; Steven Krams and Midge Blumberg-Krams; Bacardi; the Miami-Dade County Department of Cultural Affairs and the Mayor and Board of County Commissioners; and the many businesses, individual donors and members who contribute to the Cinema’s work.