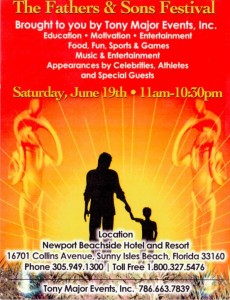 The fathers and sons festival will be an opportunity for dads to reconnect and create lasting memories with their children. The fun-filled day will include games, live entertainment, food, spa deals for mothers and daughters and special appearances by some of the community’s most influential leaders. Among the speakers slated to address the audience, U.S. Congressman Kendrick Meek, Miami-Dade commissioner Joe Martinez, Sheila Wombie, executive director of Arts for Learning and Tony Lesesne, the publisher of In-Focus magazine. Suggested donations accepted at the door, $15 for fathers and $10 for children.

WHERE:        Newport Beachside Hotel and Resort

The fathers and sons festival was created by Tony Major and Paul Schwieger, two fathers who believe in bridging together the gap that exists between dads and their children. The festival will help dads understand the profound and positive impact their existence can have on their children and on the community.  It will accomplish this through year-round activities such as, workshops, seminars, games and sports all culminating with a festival honoring all dads and their children the weekend of Father’s day. Tony is the founder and CEO of Tony Major Events, Inc., a company that promotes and coordinates events throughout South Florida. Paul Schwieger, Ph.D. is an entrepreneur and businessman with over 25 years of experience in implementing and developing business plans.