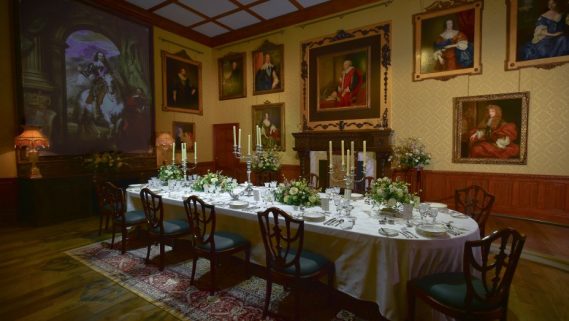 A trip across the Atlantic has never been so enticing. The US dollar continues to gain strength against the pound, a trend that is expected to continue until Britain’s exit from the European bloc in October, meaning better value for American travelers (Harrods! Selfridges! Liberty!). Additionally, the United Kingdom is now allowing citizens of the United States and Canada to use its ePassport gates. Previously, the gates had only been open to travelers from the UK and European Union, and the move is expected to significantly reduce lines at the border. Looking to the future, JetBlue has announced new routes to London from New York and Boston staring in 2021. On top of that, there is no shortage of exciting things to do once there, from museum exhibitions to new train journeys. Here is the best of what’s on offer in London and beyond this season.

In honor of the upcoming release of Downton Abbey: The Movie, guests of Belmond British Pullman will enjoy exclusive access to the Highclere Castle, home of the Crawley Family. Opening to Belmond guests on March 18 and September 23, 2020, Highclere Castle is the setting of the beloved TV series and the ancestral home of the Earl & Countess of Carnavon. On a day trip from London Victoria Station, guests will get a three-course brunch onboard the 1920s-30s carriages before disembarking for a guided tour of the house and gardens. Welcomed back onboard with a champagne reception, fans of the period drama will sit for a three-course dinner with sommelier-selected wine en route to London. Prices start from £520 (approx. $650) per person, fully inclusive.

Visitors to the Bloomsbury neighborhood of London and its green squares will not be surprised to learn that London recently signed on to be the first National Park City, vowing to turn 50 percent of the city into greenspace by 2050. Staying true to its namesake neighborhood,The Bloomsbury’s Dalloway Terrace is a true urban garden. Inspired by the English countryside, the restaurant has been transformed this summer with a striking floral installation of wild meadow flowers in partnership with Ramsbury Gin & Vodka, maker of single-estate spirits. The seasonal cocktail menu features ingredients grown on the Ramsbury Estate in Wiltshire and will also offer a gin & tonic that guests can garnish themselves with rosemary, dried apple, lemongrass, and fresh lime.

Guests can now experience the best of city & country with Belmond’s new package combining two nights at Belmond Cadogan Hotel – the British brand’s first London address with private access to the Cadogan Estate Gardens – and one night at Belmond Le Manoir aux Quat’Saisons, a 15th-century manor in the English countryside. A one-and-a-half-hour limousine transfer from London to Oxfordshire is followed by dinner for two at Le Manoir’s two Michelin-star restaurant by Raymond Blanc featuring organic produce grown in the on-site property’s gardens.

Travelers today want to live like a local when they travel. Now they can with The Doyle Collection’s new weekend curators, a partnership with native insiders who design the ideal weekend in each respective neighborhood to give the true local experience. For example, The Bloomsbury collaborates with Kirk Truman, photographer and founder of Journal, a culture and lifestyle publication focusing on the lives of modern Londoners, and Alex Coe, an artist and illustrator, who live in the neighborhood. Kirk and Alex recommend spots like Cornelissen, an art supply shop; Curzon Bloomsbury, a small arthouse cinema; and The King’s Canary, a culture hub meets barber shop.

Coinciding with the Victoria & Albert Museum’s popular exhibition, Christian Dior – Designer of Dreams which runs through September, The Kensington (just a 10-minute walk from the museum) is offering a three-night suite package including tickets to the exhibition and a custom cocktail, ‘The Corolle’ inspired by Dior’s first couture collection in 1947 named ‘La Ligne Corolle,’ and a special edition Dior hardback book. The exhibition was extended by seven weeks after selling out.

Regent’s Park Open Air Theatre is one of the capital’s true gems. Checking out a play there while the weather is still nice is a must. Guests who book a suite at The Marylebone receive complimentary tickets to the theatre. Showing through September 21 is Andrew Lloyd Webber and Tim Rice’s Tony and Oscar award-winning musical, Evita.

The Ritz-Carlton, South Beach is thrilled to have re-opened its doors following a $90 million, multi-year renovation that touched all elements of the property. Ideally located in the heart of South…