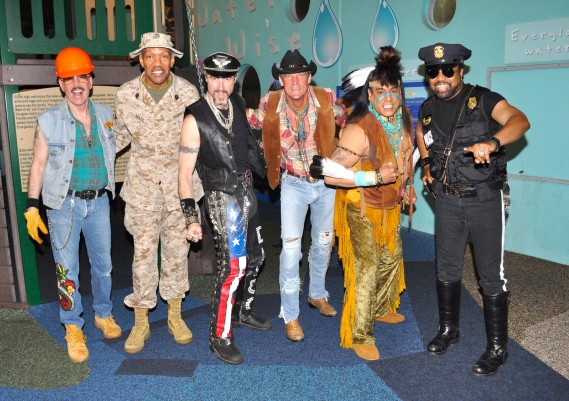 The American Musical Festival invites you to travel back to the daring days of disco, decadence and divas as it presents the Trammps, Village People and Gloria Gaynor at Hard Rock Live at the Seminole Hard Rock Hotel & Casino on September 22 at 7:30 p.m. Tickets go on sale Wednesday, August 31 at 1 p.m.

Disco legends the Trammps began in Philadelphia in 1972 featuring vocalist, Jimmy Ellis, Harold Doc Wade, Stanley Wade and Earl Young and traveled with as many as 11 members, culled from the ranks of the busiest and best musicians, many of whom also played for Gamble and Huff’s Philly International and later for Vince Montana’s Salsoul Orchestra. The Trammps’ first recording was “Zing Went the Strings of My Heart,” a remake of a tune originally recorded by Judy Garland in 1943, which reached #17 on the R&B chart and #64 on the pop charts. In 1975, the Trammps became one of the hottest disco recording acts. “Hooked for Life” and “Where the Happy People Go” became their biggest pop hits to date. Other Trammps hits included, “Disco Party,” “Body Contact,” “I Feel Like I’ve Been Livin’ (On The Dark Side Of The Moon),” “The Night the Lights Went Out” and “Soul Bones,” which features a harmonica solo by Stevie Wonder. The pinnacle of the Trammps career, however, was “Disco Inferno.” In 1977, “Disco Inferno,” was the hottest song on the international dance scene and the group was recognized as the best performing group by one of New York’s most popular clubs, 2001 Space Odyssey, the location for the motion picture, Saturday Night Fever. The soundtrack for the movie, which included “Disco Inferno,” was the industry’s biggest selling album to date and won the Trammps a Grammy Award in 1979.

Village People, who recently celebrated their 34th anniversary in 2010, defined the disco era with their international sing-along hits “In the Navy,” “Macho Man,” “YMCA,” “Go West,” “San Francisco” and “In Hollywood.” They also recorded the title hit to the 1980 feature film, Can’t Stop the Music. Together, the band has sold over 100 million albums and, over the years, has appeared on the cover of Rolling Stone magazine and in Time, Playgirl, GQ, US, People and hundreds more. They have been featured on Fox’s “Wendy Williams Show, “NBC’s “Singing Bee” with Joey Fatone and in an American Express TV commercial with Ellen Degeneres and Beyonce.  The Guinness World Records book certified their Sun Bowl appearance on December 31, 2008 as the world’s largest YMCA dance with over 40,000 fans “doing the YMCA moves” while the group performed. Also, in 2008, the band was honored with their own star on the Hollywood Walk of Fame.

She was 19 when she signed her first record contract. In 1973, Gloria Gaynor made history as Billboard gave birth to the Disco Action Charts. “Never Can Say Good-Bye” bowed at #1 on the charts and became the first dance song to reach #1 status. In 1978, Gaynor’s “I Will Survive,” took the world by storm, and today, is still one of the most requested and most popular dance hits and karaoke requests of all time. In 2001, her single “Just Keep Thinkin’ About You,” topped the Billboard Dance/Club charts at #1, while her international hit, “Last Night” with Giorgio Moroder,” debuted at #1 throughout Europe. In keeping with the theme of #1, Gloria Gaynor was the first to record an album especially for clubs, and the first to do a mega-extended dance medley party mix, releasing 12″ dance singles that are now collectors’ items. In 2002, she released the U.S. LP entitled “I Wish You Love;” her first worldwide in 15 years. It gave birth to four #1 dance singles as well as her first top ten hit, “I Never Knew,” on Billboard’s Adult Contemporary Charts. Also, in 2002, she was honored at the World Music Awards in Monte Carlo with the coveted LEGEND award presented by longtime fan, Prince Albert. She has appeared on Broadway in the longest running musical revue, “Smokey Joe’s Café,” and on TV guest-starring on That ‘70s Show, Ally McBeal and more. The film industry continues to feature “I Will Survive” on the soundtrack of more than a half dozen major motion picture releases. VH-1 honored Gloria Gaynor with the #1 spot during its countdown of the Top 100 Dance Records of All Time for “I Will Survive”. In 2005, Gaynor, along with her hit song “I Will Survive,” was inducted into the Dance Music Hall of Fame. Her autobiography of the same name is a revealing trip through her journey in life.

Tickets cost $73, $63 & $53*; all seats are reserved and available at all Ticketmaster outlets online at www.ticketmaster.com or charge by phone: 1-800-745-3000. Doors open one-hour prior to show start time. *Additional fees may apply.