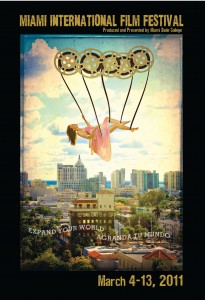 “These made-in-Miami films really represent the heart of this year’s Festival,” said MIFF Executive Director Jaie Laplante. “All three of these compelling films utilize their Miami setting in a way that is absolutely essential to their stories, and MIFF ticket buyers are clearly reacting to the authenticity that these three films exude.”

A fourth film set in Miami—under the working title Sweet 15—is currently in development, and is scheduled to receive assistance through the Festival’s internationally renowned Encuentros Program for feature-length projects in progress. Encuentros (“encounters” in Spanish) is the only development program of its kind among film festivals in the U.S.—and one of the few in the world—that is dedicated exclusively to nurturing new Spanish- and Portuguese-language cinema from Spain, Portugal, Central America, South America and the Caribbean, as well as film projects targeting U.S. Hispanic audiences. Miami-born director Anna Margarita Albelo and producer Jamin O’Brien are scheduled to attend the Festival and will also be available for interviews.

The three completed films screening at this year’s Festival are:

Three Miami high school friends — Mikey, Eric and Angel — revel in their world of private school privilege and lax parental oversight while living large on the hip-hop lifestyle of parties, fast cars, fast boats and easy sex. Miami director Aaron Salgado and producer J.D. Freixas capture the texture and energy of this pulse-pounding tropical paradise as only true insiders could. Executive produced by Andy Garcia. The ensemble cast of this made-in-Miami indie original features many locals and natives, including Dominik Garcia-Lorido (City Island), Natalie Martinez (Detroit 1-8-7), Jordi Vilasuso (All My Children) and newcomers JR Villarreal as Mikey, Michael Cardelle as Eric and Andres Dominguez as Angel.

Red Carpet: Friday, March 11 at 6:00 p.m., Gusman Center for the Performing Arts, 174 East Flagler Street, downtown Miami. (Only accredited and approved media will be permitted to cover the Red Carpet.)

Miami’s own conceptual artist Bert Rodriguez gets the movie star treatment in making sh*t up, a documentary about his own eccentric life as a masterpiece-in-progress. Miami director Bill Bilowit makes the most of his candid access, capturing Rodriguez’s exhibitions for Art Basel Miami Beach and the Whitney Biennial as he battles his personal demons in the process. The film effectively follows the artist, from the “clearance sale” of his entire art collection to his near-death head injury experience on Biscayne Boulevard and the consequences that followed. The documentary features cameo appearances and commentary by world-renowned artists Marina Abramovic, Vito Acconci, María José Arjona and Manny Prieres, among others.

Before Friday Night Lights there was Mooney vs. Fowle, the pioneering, behind-the-scenes look at the now-historic 1961 Florida state high school championship game between perennial rivals Miami High School and Edison High School. This marvel of cinéma vérité documentary filmmaking is a candid and uncensored portrait of rival coaches Ottis Mooney of Miami High (the underdogs) and Haywood Fowle of Edison (the favorites to win), who led their teams before a record crowd of 37,000 at the Orange Bowl. Long a favorite of film historians, the film is a collaboration between Miami High alumnus and LIFE Magazine editor-turned-filmmaker James Lipscomb and the legendary Robert Drew of Drew Associates, another LIFE Magazine editor-turned-filmmaker, who, in the 1960s, revolutionized reality television through his accounts of John F. Kennedy on the campaign trail (Primary) and inside the White House (Crisis). This unscripted look at the passions behind high school football stirred controversy at the time with the county School Board and was never broadcast on local television or released in local theaters. Today, on its 50th anniversary, it endures as a remarkable document of film history and Miami lore.

Advance Interviews: Contact MIFF or MDC publicists for availability of interviews with James Lipscomb or Ottis Mooney. (Subject to change.)

State of production: In development; scheduled to shoot October–December 2011 in Miami

Brief synopsis: Sweet 15, to be director Anna Margarita Albelo’s feature film debut, is a coming- of-age comedy set in Miami’s Little Havana neighborhood in the 1980s. One day, Lucy Alvarez gets an assignment in school:  present a Contribution of Work (C.O.W.) that defines your individual and cultural identity. Lucy and her best friend, Ambrosia, find the perfect project; a “Quinces” celebration, the traditional Latin celebration of a young girl’s transition into womanhood. Unfortunately for Lucy, Erika Payne, the school’s social center and daughter of a wealthy, local politician, has a suspiciously similar idea for her presentation: a Sweet 16 party to end all parties. What’s worse, all three girls share the same birthday, so Lucy and Ambrosia’s Quinces falls on the same night as Erika’s Sweet 16! Who will have the best party?

head of production and co-chair of Worldview Entertainment, a motion picture production and financing company. His film credits include Boynton Beach Club, Just Like the Son written and directed by Morgan Freeman, and Handsome Harry, starring Jamey Sheridan, Steve Buscemi, and Campbell Scott.

Interviews: Albelo and O’Brien will be available in Miami for interviews.