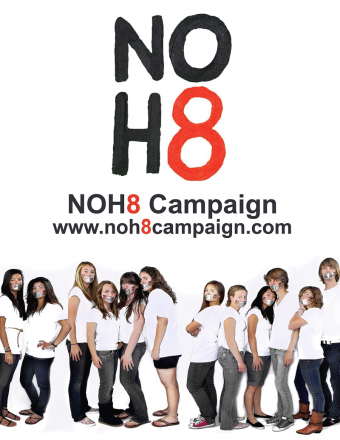 The NOH8 Campaign (the photographic silent protest created in direct response to the passage of proposition 8) will be holding an open to the public photo shoot in Miami. Anyone that would like to join the NOH8 Campaign is asked to wear a white shirt to math the look of the signature NOH8 photos. Once guests arrive, the NOH8 Campaign will apply the NOH8 temporary tattoo to each persons face and will also supply guests with the silver duct tape for the photo. Celebrity photographer and co-founder Adam Bouska will photograph 5 to 10 frames for each person that comes through. The final selection he chooses will be retouched and make available in 4 to 8 weeks on the website, www.NOH8Campaign.com. Celebrities who have participated include the Kardashian sisters, Cher, Kathy Griffin, Jane Lynch, Pete Wentz, Holly Madison & Guilana Rancic among many others.

WHERE: Trio on The Bay

*Funds raised by the NOH8 Campaign will be used to continue promoting and raising awareness for marriage equality and anti-discrimination through NOH8’s interactive media campaign. This includes bringing the campaign to other cities around the country, as well as compiling the images for a large-scale media campaign. Under consideration is the expansion of our campaign to other media, including television and radio broadcast, billboards, and magazines. Contributions are also used to cover the daily operations and maintenance necessary to run this rapidly growing campaign.

The NOH8 Campaign is an approved 501(c)(3), donations will be tax-deductible up to the amount allowable by law.