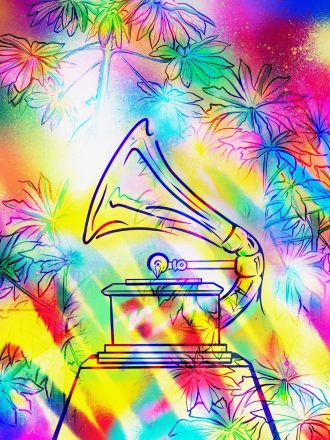 The Latin Recording Academy® has announced that Puerto Rican fine artist Sofia Maldonado has been selected as the official artist of the 21st Annual Latin GRAMMY Awards®. Maldonado’s work will be featured prominently on collateral materials before and during the 21st Annual Latin GRAMMY Awards, which will broadcast live on Univision on Nov. 19 from 8–11 p.m. ET/PT (7 p.m. Central).

“Maldonado’s art is powerful and full of effervescent colors reminiscent of Puerto Rico, the island where she was born. Her art recognizes resilience amid moments of despair while also celebrating and empowering Latin communities,” said Gabriel Abaroa Jr., President/CEO of The Latin Recording Academy. “Together, these components reflect the elements of Latin music that unite us all during joyful but also difficult moments.”

In the artwork created especially for the 21st Annual Latin GRAMMY Awards, Maldonado portrays through vibrant colors the importance of enjoying life even during challenging times. Adjusting to an even more virtual world, the official artwork will be rendered mainly, digitally. Inclusive of the iconic gramophone symbolizing excellence in music, this year’s artwork also includes an outline of a tropical tree — a yagrumo, which symbolizes rebirth. The yagrumo is native to Puerto Rico and after a hurricane is the first tree to reemerge. Additionally, in Puerto Rico, the yagrumo is used to create music instruments such as the tiple and cuatro puertorriqueño, a traditional string instrument smaller than a guitar but larger than a mandolin.

An acclaimed painter and muralist from Old San Juan, Puerto Rico, Maldonado graduated from the Pratt Institute of Brooklyn, New York and the San Juan School of Visual Arts. She has shown her work in individual and collective exhibits in galleries, museums and public spaces in all over the world, including top specific locations such as Whitney Biennial, the Museum of Latin American Art, as well as Scope and Art Miami. Maldonado’s characteristic style is recognizable for its Caribbean palette and roots in muralism (or muralist art). She deconstructs organic forms in order to explore color fields in her work.

“It is an honor to be the first Puerto Rican artist to collaborate with such an iconic organization and award show, especially during a time when we need to empower and bring joy to our communities. My art has always been in conversation with my context and during the past few months, living in the pandemic and seeing the resilience of our Latino community, inspired the creation of this piece and will continue to inspire my work in the future,” said Maldonado.