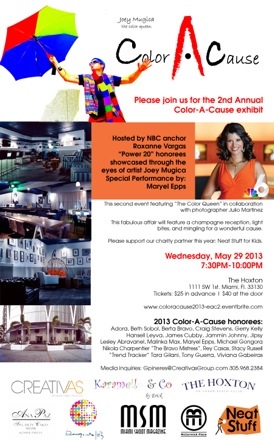 Joey Mugica known locally to most as “The Color Queen” proudly announces that he is ready to unveil the “Power 20” at the second annual Color-A-Cause on Wednesday May 29, 2013 at the Hoxton located at 1111 SW 1st Ave Miami, FL 33130.

This year’s Color-A-Cause will feature the Power 20 which will represent 20 of South Florida’s most influential people. Mugica will “Color Queen” the honorees by adding his unique dose of color to original photos by Julio Martinez. The colorization effects of Mugica’s images have become so recognizable that they are considered his unique art form. Proceeds of this year’s Color-A-Cause benefits non for profit Neat Stuff for Kids which provides brand new clothing to neglected and underprivileged children.

To be “Color Queened” has become quite the honor as the talented Joey Mugica coined the term as he would photograph friends and local celebrities and then manipulate the colors to bring out a very stylized version of the original. His creations became the rage amongst the public which inspired him to create an annual event, Color-A-Cause where he could showcase his work while collaborating with a great charitable foundation.

Joey Mugica said, “It has been an honor for me to shoot many people throughout the years whom I respect, admire and love. This event gives me the opportunity to showcase beauty seen through my eyes while giving back to my community. ”

The 2013 edition of Color-A-Cause will benefit Neat Stuff for Kids. Neat Stuff, Inc. was founded in 1995 with the mission to provide free new clothing and school uniforms to abused, neglected, and abandoned and other at-risk children. Neat Stuff was created by local community child advocate Phyllis Krug, who identified a critical need for children involved in the social services system. Today, under the direction of Executive Director Franklin Monjarrez, the organization is proud to be the only agency of its kind in South Florida proudly serving an average of 8,000 at-risk children and distributing over $.7 million worth of new clothes, school uniforms and accessories annually. The major story is not just what they do but how they do it.

Joey Mugica wishes to add a dose of color into the lives of these affected children and Color-A-Cause gives him the platform to give back to the community which has supported his dream. Mugica asks the public to join him on Wednesday May 29, 2013 in support of creativity and children.

The 2nd annual Color-A-Cause “Power 20” will take place on Wednesday May 29, 2013 at the Hoxton located at 1111 SW 1st Ave Miami, FL 33130 and include a cocktail reception, light bites courtesy of The Hoxton and couture sweets by Ana Paz. Tickets can be purchased online: http://coloracause2013-eac2.eventbrite.com/ on the Color a Cause “Power 20” Face book page or at the door. Attire requested is