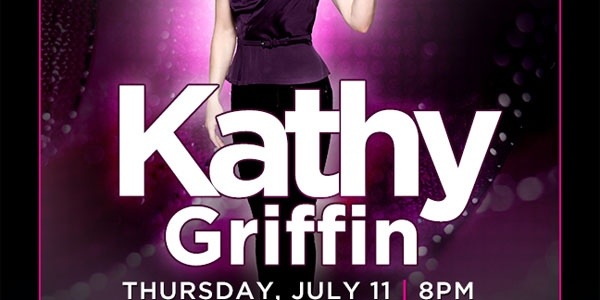 Award-winning, sharp-tongued comedienne Kathy Griffin is back for more applause at Hard Rock Live at the Seminole Hard Rock Hotel & Casino on Tuesday, July 11, 2013 at 8 p.m. Tickets go on sale Saturday, May 11 at 10 a.m.

After moving to California from her native Chicago and joining the famed Los Angeles Groundlings comedy improvisational troupe, Griffin began building her resume with guest roles on series such as ER and Seinfeld. In 1996, Griffin’s dream of playing a sidekick on a sitcom came true when she landed the role of Vickie Groener, Brook Shields’ sharp-tongued colleague, on the NBC show Suddenly Susan.

After her various TV guest spots, Griffin began gaining notice as a stand-up comedienne and landed her own HBO Half-Hour Comedy Special. In 1998, HBO gave Griffin her own one-hour special, A Hot Cup of Talk. She won Celebrity Mole on ABC, and then hosted the NBC reality series Average Joe as well as the MTV series, Kathy’s So-Called Reality. In 2010, Griffin took a dramatic turn on Law and Order: SVU where she riveted audiences with her portrayal of a lesbian activist with a secret.

In 2005, Griffin’s reality show, Kathy Griffin: My Life on the D-List, debuted on Bravo to rave reviews. All six seasons of that show were each nominated for an Emmy for Outstanding Reality Program. Seasons three and four won that prize, back-to-back, in 2007 and 2008.

In 2008, Griffin released her first comedy album, For Your Consideration, which received a Grammy nomination for Best Comedy Album and garnered Kathy the acclaim of being the first female comedian ever to debut at #1 on the Billboard Top Comedy Albums chart.

She has co-hosted The Billboard Music Awards three years in a row and hosted Bravo’s A-List Awards two years in a row. She has appeared on numerous talk shows in addition to filling in for Larry King on Larry King Live. On the small screen she has guest starred on Privileged, Days of Our Lives and Ugly Betty. Film credits include: It’s Pat and Four Rooms and Hall Pass.

Griffin has supplied voices for many TV series and movie animated characters and has also appeared on the X-Files as well as in Eminem’s video, The Real Slim Shady, which was co-directed by Dr. Dre.

In 2009, Griffin added best-selling author to her list of many achievements. Her tell-all autobiography entitled, Official Book Club Selection: A Memoir According to Kathy Griffin, topped the New York Times Best Sellers List as well as The Wall Street Journal and Publishers Weekly lists.

In 2011, Griffin’s Broadway show, Kathy Griffin Wants a Tony, at the famed Belasco Theater received rave reviews and sold over one million dollars in tickets in less than a week.

Griffin’s talk show, KATHY, ran for two seasons on Bravo. The show was a different take on talk shows, having all of the guests on-stage at the same time discussing everything from current events to upcoming projects. KATHY had amazing guests combos that included Chris Noth and Chelsea Handler, A$AP Rocky, Danny Brown and Russell Brand, Jesse Tyler Ferguson, Lily Tomlin and Darren Criss.

Griffin is very involved with the gay and lesbian community. In addition to receiving the 2009 GLAAD Vanguard Award and Lifetime Honoree recognition from The Trevor Project, she is the recipient of the 2009 Gracie Award, the 2007 GAVYN Awards Honorary Gay, the 2006 Ladies Home Journal Funny Ladies We Love Award and Lambda Legal Liberty Award. Other honors include the 2003 Toys for Tots Commander’s Award, Women’s Night Special Comedic Award, Lucie Award and 2005 Aid for AIDS Friend of the Year. She has also been nominated four years in a row for the Television Producer of the Year in Non-Fiction Television PGA Award.