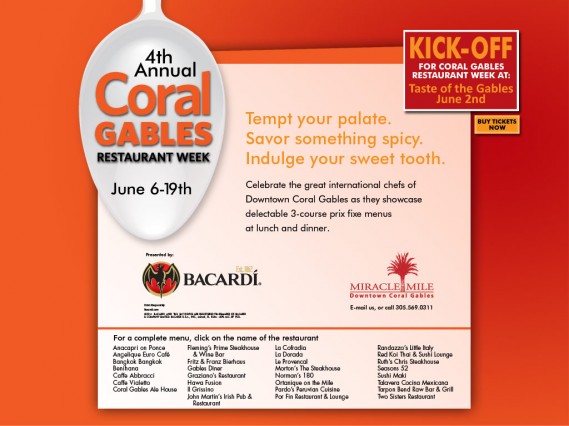 On Thursday, June 2, from 6 – 8 p.m., foodies will have the chance to cast their vote for the “Best Taste of the Gables” award after sampling various “tastes” from over 20 restaurants participating in Coral Gables Restaurant Week presented by Bacardi U.S.A., Inc.

Taste of the Gables will be held in the historic Rotunda of the Westin Colonnade Hotel. Advance tickets are $25 and can be purchased online at coralgablesrestaurantweek.com. VIP tickets to the all-new 1862 Room are available at $100 per person and will be limited to the first 100 patrons. A portion of the proceeds will be donated to United Way of Miami-Dade.

Now in its fourth year, Coral Gables Restaurant Week will preview on June 2 following Taste of the Gables and will officially launch on June 6 and run through June 19. During these two weeks, participating restaurants will offer special three-course lunch and dinner menus at savings of at least 20 percent. Guests (21 years and older) will also have the chance to try the Original BACARDI® Mojito Cocktail or a glass MARTINI® Prosecco wine, the official cocktails of Coral Gables Restaurant Week, at participating restaurants with full bars.