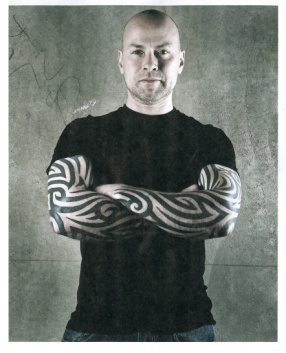 Steven S. Deknight, executive producer, creator and headwriter of the highly-anticipated series, Spartacus:  Gods of the Arena took some time to discuss the premiere of this epic adventure drama series.

“Spartacus: Gods of the Arena” tells the story of the Champion of the House of Batiatus in a more ruthless time before Spartacus’ arrival, when honor was just finding its way into the arena. As the prequel begins, Quintus Batiatus is the acting Lanista while his father is on an extended visit to Sicilia. But Batiatus isn’t satisfied with just the thought of taking over the Ludus one day; he aspires to political power and prestige in Capua, and perhaps beyond. In the class-conscious world of ancient Rome, the House of Batiatus must first earn the respect of politicians as well as socialites before being granted the right for its gladiators to fight in the much-revered championship bouts called the Primus. Batiatus must not only survive the harsh politics of Capua, but also compel his hedonistic fighter, Gannicus, to embrace being a champion gladiator who will bring esteem and respect to the House of Batiatus.

Spartacus:  Gods of the Arena (premiering on Starz on Friday, January 21 at 10pm et/pt)

This is a truly gripping and entertaining epic adventure. There is nakedness, alcohol, blood, betrayal, and sex all the sinful addictions to have viewers glued to their TV sets. Tell us why Spartacus: Gods of the Arenas isn’t like anything on TV.

Steven S. DeKnight: Well to start with we’ve got the support of Starz, which has been fantastic. They let us tell the story that we want to tell. They don’t’ try to rein us in and if you’ve seen the first episode, you know, we go places that other shows don’t, quite frankly. We try not to censor ourselves. We try to tell the best story we can with what we have. And then, it’s really unlike any other TV show in that respect, but also visually it’s – we’ve taken a page from Zach Snyder’s book. We loved his work and decided to shoot the whole thing indoors on green screen and give it a very graphic, novel look and feel. So in that respect too it’s absolutely unlike anything out there on TV right now. And also in respect to the action, we do feature-level action on this show that Dustin and Manu can attest to, that is extremely grueling, time consuming and other shows just don’t tackle it on such a grand scale.

Talk about the love affair between Jaime Murray (Gaia) and Lucy Lawless (Lucretia).

Steven S. DeKnight: Yes well, not to give anything away to the fans, but Jaime Murray’s character, Gaia, comes into town and you find out she’s an old chum of Lucretia’s from back in the wild days. And Lucretia is trying to become more respectable. But Gaia is still the wildcard, unlike Ilithyia and Lucretia in Season 1, Gaia actually loves Lucretia, will stand by her through thick and thin, but is not adverse into hulling her into a bit of old-time trouble. And they’re very, very friendly. I’ll just leave it at that.

Liam McIntyre was picked up for Season 2 and you guys are going to start shooting soon. Can you give us any kind of additional juice or information?

Steven S. DeKnight: The only juice I’ll give you is that it’s extra sweet. Season 2 is shaping up to be a hell of a ride. We’re actually almost halfway through figuring out Season 2. You know, we’re obviously deeply saddened that Andy couldn’t continue with us. He was a huge part of the show’s success. And we’re – you know, we wish him the best and a speedy recovery. And we did an exhaustive search to find somebody not to replace Andy, but to step into the role of Spartacus. And feel very fortunate that we were able to find Liam, who we really felt really embodied everything we were looking for in the character moving forward.