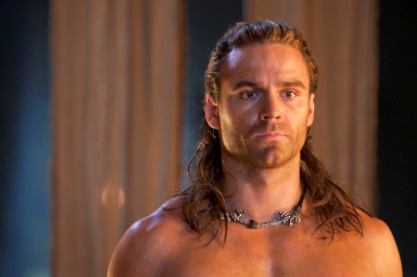 Dustin Clare plays Gannicus, the champion gladiator of Batiatus’ ludus in “Spartacus: Gods of the Arena,” a Starz original action-adventure drama series. In the class-conscious world of ancient Capua, the House of Batiatus has not yet earned the respect of local society, or the right for its gladiators to fight in the championship bouts. Gannicus must survive the arena to not only keep his place in the ludus but also rise to become the champion in all of Capua.

“Spartacus: Gods of the Arena” tells the story of the Champion of the House of Batiatus in a more ruthless time before Spartacus’ arrival, when honor was just finding its way into the arena. As the prequel begins, Quintus Batiatus is the acting Lanista while his father is on an extended visit to Sicilia. But Batiatus isn’t satisfied with just the thought of taking over the Ludus one day; he aspires to political power and prestige in Capua, and perhaps beyond. In the class-conscious world of ancient Rome, the House of Batiatus must first earn the respect of politicians as well as socialites before being granted the right for its gladiators to fight in the much-revered championship bouts called the Primus. Batiatus must not only survive the harsh politics of Capua, but also compel his hedonistic fighter, Gannicus, to embrace being a champion gladiator who will bring esteem and respect to the House of Batiatus.

Recently casted as the newcomer to the series, this gladiator screams sex on and off TV. I caught up with him to find out about his status as a sex symbol and to find out more on his involvement in Spartacus: Gods of the Arena.

Dustin, how does it feel to be the new guy?

Dustin Clare: The new guy. The new guy’s always great because, you know, you get to go in fresh with, you know, your own choices and you get to bring new life and breath kind of a new energy into something that’s already established. I play Gannicus. Gannicus is a pretty self-destructive gladiator who I modeled really on (Anthony) the boxing arena and he’s very confident and cocky fighter, but extremely skilled. Gannicus has an extreme amount of skill, but he’s very self destructive and he’s always trying to escape his reality. And, yeah, he was an interesting character who we get to really unpick through the six episodes. And we have a great through line and a great opportunity to see this man rise within everything that kind of keeps him down, he sort of butts against.

What’s your take on being the new guy and a sex symbol?

Dustin Clare: I don’t know. Manu came up to me a lot in the show. No, I’m sorry, (unintelligible) take any of that stuff serious. I don’t take any of that stuff seriously to be honest with you. You know, I look at it from a working perspective and from, you know, perspective of like, you know, getting in and trying to do the best work I can and, you know, I’m passionate about being an actor and I’m definitely not passionate about being a sex symbol.

Gannicus appears to have it all, you know, the looks, the body, the woman. Is his life much different than yours?

So was this one of the most physically demanding roles that you were ever in?

Dustin Clare: It was very much physically demanding role that I’ve ever been in, yes. Yeah, it was intense. The training, the constant training, once you start filming, keeping up the training we were doing – I was doing seven hours a day for three weeks — different things, stunts, cross-training, fighting with double swords and then a session in the pool. So that was quite intense. But yeah, very physically demanding. You come away with a lot of cuts and bruises, you know, we’re all aware that we hurt each other, you know, physically all the time. But like, you know, we’re in it together. We never really mean it and, you know, we’re all fighting for a great result ultimately. And, you know, a big testament to that is definitely to the fight choreographers, (Alan Populton), (Tim Wong), (Paul Shatkoff), those guys, are just, you know, world-class stunt choreographers and, you know, Manu and myself and Peter, everyone, we’ve all got to learn from the guys who are best in the business and they’re skills that we’ll have for the rest of our lives as actor so that’s a big plus.