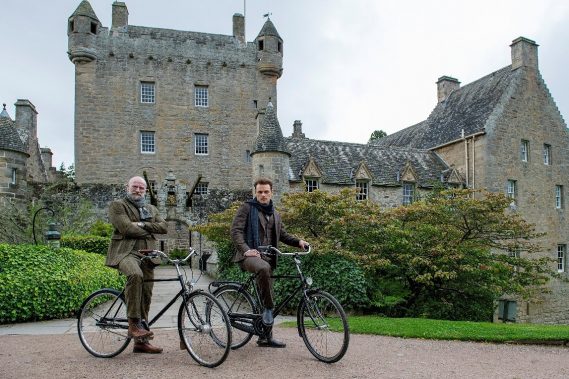 Starz, a Lionsgate company (NYSE: LGF.A, LGF.B), today announced it has picked up the unscripted travel docu-series “Men in Kilts: A Roadtrip with Sam and Graham” created by and starring Sam Heughan (“Outlander,” Bloodshot, The Spy Who Dumped Me) and Graham McTavish (“Outlander,” “Preacher,” Hobbit trilogy) from Sony Pictures Television. The half-hour, eight-episode series is a celebration of Scottish history and culture as Heughan and McTavish take viewers along on their adventures, discovering the rich, complex heritage of their native country, meeting various local artisans and experts, and experiencing genuine moments of awe and fascination as the duo share their travels with the audience rather than simply guiding them.

The journey of “Men in Kilts: A Roadtrip with Sam and Graham” takes viewers from the heart of Scotland at Glencoe, the site of a great massacre and major clan feud to Inverness and the Culloden battlefield, the site of a great battle and historic turning point, known well to fans of “Outlander,” that molded Scotland as we know it today.

“’The genuine curiosity and passion that Sam and Graham have for the landscapes they visit and the stories they uncover while traveling through the heart of Scotland makes ‘Men in Kilts: A Roadtrip with Sam and Graham’ a truly enjoyable journey of discovery for the audience,” said Christina Davis, President, Original Programming of Starz. “The series gives context and texture to Highland life and history, woven together, much like the tartan for which Scotland is so famous, and we look forward to taking this road trip with these two great friends.”

“We are so excited to take viewers on this epic adventure with Sam and Graham. Their bond of friendship and genuine curiosity about the rich culture of Scotland is going to make for an unforgettable journey for all,” added Holly Jacobs, Executive Vice President, Alternative and Syndication Programming, Sony Pictures Television.

Sam Heughan is best known to television audiences for his portrayal of Jamie Fraser on the hit STARZ Original series “Outlander.” He has been nominated for multiple awards for this role including: BAFTA Scotland award, Critics Choice, People’s Choice and a Laurence Olivier award. Most recently seen in Bloodshot alongside Vin Diesel, and The Spy Who Dumped Me with Kate McKinnon and Mila Kunis, Heughan began his career at the The Traverse Theatre Edinburgh and The Royal Court London, has appeared in many television, film and theater productions and has played London’s West End.

Graham McTavish’s career as an actor spans 35 years in film, television, theater, animation and video games. He most recently starred as ‘The Saint of Killers’ in the television series “Preacher,”  based on the cult graphic novels of the same name. He is best known as Dougal Mackenzie, the machiavellian war chief, in the STARZ hit show “Outlander,” and ‘Dwalin’ in the Hobbit trilogy. He is also known to fans of Castlevania, as ‘Dracula,’ as well as other well-known performances in “Lucifer,” “Colony,” Creed, Rambo and as ‘Fergus McDuck’ in Duck Tales.

He began his career in theater in the UK appearing at, among others, The Royal Court Theatre, the National Theatre and the Royal Lyceum Theatre, as well as writing, producing and performing his own play about Vincent van Gogh which toured throughout the world to critical acclaim.

“Men in Kilts: A Roadtrip with Sam and Graham” is created and executive produced by Sam Heughan, Graham McTavish and Alex Norouzi and is produced for Starz by Boardwalk Pictures in association with Sony Pictures Television.