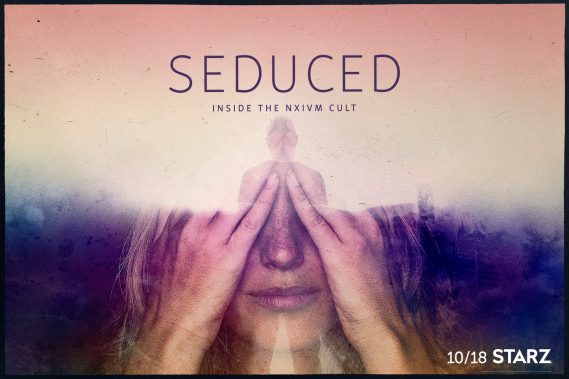 The Exclusive Personal Journey of India Oxenberg and
Her Harrowing Story of Coercion, Abuse and Recovery
From Emmy®-Nominated Filmmakers
Cecilia Peck and Inbal B. Lessner

Starz, a Lionsgate company (NYSE: LGF.A, LGF.B), announced today on “Good Morning America” that the four-part STARZ Original docuseries “Seduced: Inside the NXIVM Cult” will premiere on Sunday, October 18 at 9 PM ET/PT on STARZ in the U.S. and Canada. “Seduced: Inside the NXIVM Cult” takes viewers through a deeply intimate, first-person account of the self-help group turned destructive sex cult NXIVM. The series will air day and date in the UK and Spanish-speaking Latin America on the Starzplay international streaming service, and then on November 15 across the rest of the Starzplay footprint in Europe, Brazil and Japan. Starz also released the official key art and trailer for the series.

“Seduced: Inside the NXIVM Cult” chronicles the extraordinary and harrowing journey of India Oxenberg — the daughter of Hollywood actress Catherine Oxenberg and a descendant of European royalty — who was seduced into the modern-day sex-slave cult NXIVM. More than 17,000 people, including India, enrolled in NXIVM’s “Executive Success Programs,” a front for the cult and a hunting ground for its leader, master predator Keith Raniere. Women in DOS, a secret master-slave society within NXIVM, were sex-trafficked and branded with a cauterizing iron. Both about a mother trying to save her daughter and recovery from trauma, the series follows India’s seduction, indoctrination, enslavement, escape — and her role as “co-conspirator” in assisting the U.S. government with bringing down Raniere and his criminal enterprise. In addition to being a rigorous and unsparing examination of India’s abuse and her own culpability, it explores how India and a chorus of other women are still grappling to make sense of their experience. The series also showcases extensive insider footage and exposes the inner circle of enablers around Keith Raniere.

“‘Seduced: Inside the NXIVM Cult’ is an intimate, harrowing first-person account of India Oxenberg’s seven-year journey through hell as she — like many other young women — was drawn into the clutches of cult leader and sexual predator Keith Raniere,” said Christina Davis, Starz President of Original Programming. “This is the first time India Oxenberg will speak publicly about her experience with the cult’s abuses as she retraces her steps, taking viewers deep inside the cult, meeting with former members, lawyers, therapists and cult analysts.”

The series comes from the filmmaking team of Cecilia Peck and Inbal B. Lessner — collaborators on the Emmy®-nominated Brave Miss World — who serve as executive producers with Daniel Voll, Alexandra Milchan and India Oxenberg. Peck also serves as director and Lessner serves as lead editor.

“I had been targeted for recruitment by NXIVM, so the subject was of personal interest,” Peck said. “In many ways, India could be anyone’s daughter. She was a young woman victimized by a serial predator, and I wanted to find out how this 19-year-old girl had become indoctrinated. There was a fearless quality to her inquiry that we were drawn to.”

“The most common question people have is ‘Why didn’t she get up and leave when no one was forcing her to stay?’” Lessner adds. “The brave women who shared their stories with us have struggled with self-blame and shame for falling prey to this cult. All of their voices were instrumental in telling a very complex story, which we hope shines a light on systematic manipulation and coercion.”