Daniel Lewis – A Life of Dance, New World School of the Arts’ dance performance, in honor of Daniel Lewis, was the climax of an invigorating choreographic affair. Honoring the founding dean of dance, whose dedication and commitment to NWSA surpasses twenty four years, the recognition not only offered an opportunity for alumni, faculty, and students of South Florida’s premier arts conservatory to reconnect and engage with each other and with loyal arts enthusiasts and supporters, but it also brought to our community a plethora of professional dance companies and respected choreographers from across the nation.

The soirée began with a VIP reception at La Loggia Restaurant, in downtown Miami, where more than 150 of Dean Lewis’ colleagues and closest friends from around the world, gathered to share memorable anecdotes about the dean’s artistic and educational career. Among the speakers were Jeffrey Hodgson-NWSA Interim Provost, Richard Klein-founding Provost of New World School of the Arts, Jack Anderson, renowned dance critic for the New York Times, and Edward Effron-dance lighting designer and long-time friend of Daniel. With a sumptuous menu, photos and laughter, and unique stories to last a lifetime, the VIP reception was the perfect prelude to what would soon become one of New World School of the Arts’ most outstanding dance presentations.

Just a short distance away, over 700 guests gathered for the special tribute concert at Miami’s landmark theater, Gusman Center for the Performing Arts. The dance concert, directed by NWSA faculty Josée Garant, began with a presentation of proclamations by City of Miami and City of Miami-Dade County in honor of Daniel Lewis. Followed by an emotional retrospective video of Dean Lewis’ artistic career, which began at the tender age of four, Robert Battle, NWSA alumnus and Artistic Director Designate for Alvin Ailey American Dance Theater, set the ideal mood for a stellar evening of dance with a warm, witty, and humorous opening address.

Among the choreographies presented at Daniel Lewis – A Life of Dance were Vespers for Frida, choreographed by NWSA’s Peter London, Serenata Morisca, by Martha Graham, Anna Sokolow’s September Sonnet, Battlefield by Robert Battle, and Daniel Lewis’ own choreography And First they Slaughtered the Angels, among others. Other notable speakers throughout the evening were Michael Uthoff-Artistic Director of Dance St. Louis, Gerri Houllihan-American Dance Festival, Jim May-dancer and Artistic Director of Sokolow Theater Dance Ensemble, and Carla Maxwell-Artistic Director of José Limón Dance Company. 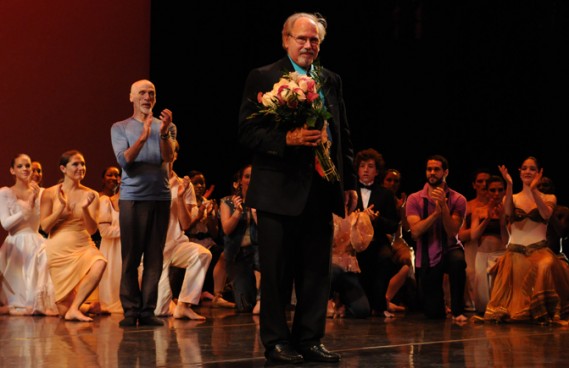 During the outstanding concert, Interim Provost, Jeffrey Hodgson, announced the Daniel Lewis Endowed Scholarship, made possible through the generosity of New World School of the Arts’ Foundation and Executive Board members. With a $10,000 contribution by former Foundation Board member Lydia Harrison and her husband Burt Harrison, the endowment, which will become one of Dean Lewis’ legacies at NWSA, quickly raised in excess of $36,000 to benefit the college dance students of New World School of the Arts.

To culminate the evening, fellow deans Jim Gasior [Music], Patrice Bailey [Theater], and Maggy Cuesta [Visual Arts], accompanied by high school Principal Lisa Noffo, presented Dean Lewis with a beautiful ceramic sculpture by NWSA visual arts faculty, Susan Banks, as a sign of friendship and seal of gratitude for the more than two decades of service and commitment to New World School of the Arts.