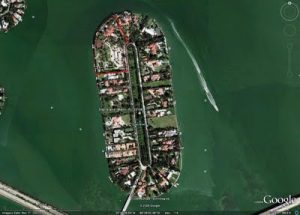 Star Island in Miami Beach is home to the stars, and is one of the most exclusive communities in Florida. The island consists of only 32 properties, and is coveted for it’s location and privacy. Residents of Star Island include celebrities Sean Combs (P Diddy), Gloria Estafan, Rosie O’Donnell, and New York Yankees star Alex Rodriguez (A-Rod). Recently, a home previously owned by NBA basketball star Shaquille O’Neal, was reportedly purchased by Naomi Campbell’s billionaire boyfriend, Vladislav Doronin.

Perhaps the single most prized property on Star Island is a 6 acre parcel of land located on the northwest tip of the island, owned by billionaire Phillip Frost and his wife. Mr Frost was the chairman of a large drug company, Ivax, which was sold several years ago. Situated on this amazing waterfront lot, is a 28,000 square feet mansion which was built in 2001. According to the Dade County property records, the property is assessed at a value of slightly more than $58,000,000, and the annual property taxes in 2008 were $730,000.