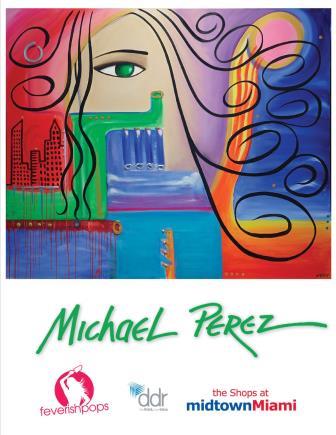 It’s a celebration!  Immediately following the Miami Heat Championship Parade midday on Monday, June 24, 2013, The Shops at Midtown Miami will host a White Hot Heat Happy Hour broadcast live by DJ Ice-T of 99 JAMZ WEDR-FM.  The celebration will spill onto the lawn and around the fountain of the Midtown Miami plaza and will feature  an appearance by local Pop Artist Michael Perez, interactive stations and giveaways from local businesses.

All in the Miami community are invited to come and share in the continued celebration and delirium that started in the last moments of Game 7 as the Heat won the NBA Championship and will no doubt continue well into the week to come.  So, even if you have to make it to work on Monday you can still join in on the party in Midtown.

The Miami Heat Championship Parade will start on Monday, June 24, 2013 at 11:00am in Brickell Village and will wind over the Miami River Bridge ending at the American Airlines Arena.

Find Pop Artist Michael Perez by his painting in the Midtown fountain plaza after 3pm on Monday.