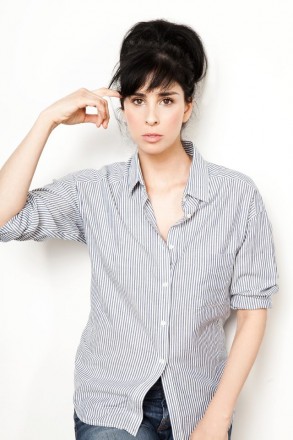 Sarah Silverman performs Saturday, April 20, 8 p.m. at the Fillmore Miami Beach. Emmy winner Sarah Silverman, dubbed by Rolling Stone “the most outrageously funny woman alive,” is as versatile of a performer as they come. Her repertoire includes everything from film and television, stand-up comedy, to iconic online videos, and she added author to this list when she released her first book the New York Times Bestseller, The Bedwetter: Stories of Courage, Redemption, and Pee.
Silverman was nominated for a Primetime Emmy in the Outstanding Actress in a Comedy Series category for her portrayal of a fictionalized version of herself in her Comedy Central series “The Sarah Silverman Program.” This marked Comedy Central’s first ever Emmy nomination in a scripted acting category.
Silverman voices a character in the Oscar nominated Disney animated film Wreck it Ralph and was recently seen starring opposite Michelle Williams and Seth Rogen in the dramedy Take This Waltz.  Tickets are $59.50, $45.00 and $35.00.

And don’t forget to catch the free Outdoor Comedy Stage on Lincoln Road at Euclid Avenue, nightly from Thursday through Saturday at 9PM.  Always a highlight of the Festival, this year you can catch rising stars Michael Che, Chris Distefano, Sean Donnelly, Sarah Tiana and Brooks Wheelan.