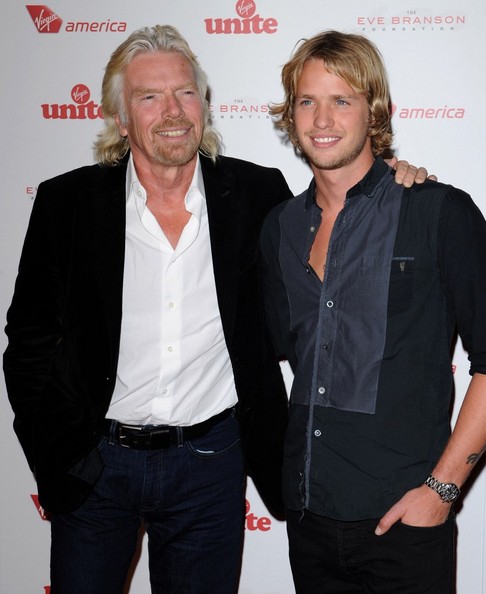 ‘I want to make documentaries about global issues like climate change in a young, funky and cool way so audiences can relate to them, says Sam Branson, Founder of Current Sponge.
Sam Branson, the younger offspring of Virgin Group founder, Sir Richard Branson is no stranger to adventurous expeditions and the effects of climate change.

After a brutal and life changing experience on an expedition to the Arctic and several encounters with polar bears, Sam returned seeing the world in a whole new way; believing he could do anything, understanding that sometimes you have to face the possibility of death to feel alive and having a better understanding as to why his dad undertakes these death defying adventures.
With this renewed self recognition and awareness, Sam became more interested in preserving the environment and independently went on an adventure to raise awareness among young people about the realities of global warming.

Stepping outside his family’s empire to launch his production company, Current Sponge and his television career, Branson will bring his experience as an explorer to Current TV. This Earth Day as a part of Current TV’s Earth Fights Back weekend, Sam will debut “Man Versus Earth” in a one hour special with encore presentations airing throughout the weekend.

According to Sam, the snow is such a beautiful and useful element in terms of recreation, and we are often blinded by its subtle nature; hence forgetting that it can become a lethal and unforgiving weapon, if slight changes are made.

In his debut film, Sam will journey to the frontlines, meet with scientists and experts who have studied the cause and effects of some of the most dangerous avalanches.

On his journey, he will meet with people who have suffered from nature’s wrath, experience what it takes to rescue someone who who is trapped by an avalanche within 15 minutes. He will also experience what it is like to be buried alive and the fear of not knowing if one may be rescued alive. While attempting these life threatening experiments he will test the technologies that are used to battle these extremities.

Like Current TV’s mantra-stories that no one else is telling in ways that no one else is telling them-Sam will aim to offer smart programming using this platform to educate, entertain and offer alternate solutions in the fight against global warming. And to help to bridge the gap, educate and bring awareness to his generation on social responsibility.

Certainly, having a dad who is very engaged in environmental protection and sustainability, and tackling social problems around the world helps to influence Sam in making social and conscious environmental decisions. He has an important platform with a significant amount of power to make a difference through his production company, Current Sponge and his family’s varied green initiatives.

Sam Branson’s newest adventures and projects have replaced the title playboy to explorer, producer, entrepreneur and presenter. On this Earth Day, while millions across the globe participate in various green programs and celebrate the 41st anniversary, Sam will be doing his part to spread awareness on how to protect and respect mother earth.

Before the debut of Man Versus Earth, Daedrian McNaughton had a unique opportunity to talk with Sam Branson about his new project.  His explorations attest to the fact that the apple doesn’t fall too far from the tree; like father like son. Sam went from being totally in control to being trapped with fear under 4-5 feet of snow with only a breathing apparatus for survival for nearly one hour. An experiment that gave him first hand experience and made him realize how catastrophic the forces of nature can be when caught in it. What happens to Sam after the breathing aid was removed? Find out in the interview below.

In “Man Versus Earth,” Sam Branson investigates the many ways seemingly harmless snow can become a potentially fatal disaster for those who challenge it. To test his own survival skills, Sam volunteered to be buried alive in an avalanche. Watch as he reveals how the snow impacted his body and slowly made him panic in this web exclusive.


What is Man vs. Earth?
Man Versus Earth is a series of documentaries narrated by me with people who have battled the elements of snow, wildlife, floods, hurricanes, and earthquakes and the cutting edge technology that are created to survive them.

What was your motivation for going on these expeditions?
In 2010 I started my own production company, Current Sponge to make challenging, entertaining, compelling film and TV shows to educate people on serious subject matter and also to entertain. I’ve been lucky enough to travel, and I think the experiences of different cultures, people and places has made me quite passionate about the world. I’ve always been interested in the medium of film, and what I’m doing now is using it as a tool to give those experiences to people who don’t actually get to visit these places. And I’ve got quite a bit of experience in expeditions, so it was a natural journey to go on.

After conducting these experiments, what was the most revealing and surprising results? And what was it like to be buried alive?
One of the experiments was to be buried in an avalanche that we made our own. It was very interesting to be put in that situation and to experience what it was like getting someone out of an avalanche; how difficult it actually is. It was very hard…..I was actually buried under 4-5 feet of snow and that was pretty nerve wrecking. Imagine being covered in a swimming pool that was actually covered in concrete. There was an inch of space for my face. While trapped in the avalanche my only lifeline was the Avalung apparatus which was attached to me and later removed for a few minutes for me to experience what it was like without the survival aid. The Avalung allows you to breathe for up to two hours. Otherwise, you’ve got only 15 minutes before you asphyxiate. Experiencing that made me realize I would never want to be caught in an avalanche.

Were you afraid?
I went from being calm and collected to catastrophic. It was claustrophobic; I was nervous and afraid.

Some of your dads exploits and projects are fairly dangerous, do you worry for his safety?
I would be a complete idiot not to worry about the safety of my dad, especially when your loved ones are doing life-threatening things…risk taking events.

Do you have any intentions of following in your dad’s footsteps and take your adventure and expeditions to the next step?
Maybe down the line. To be honest, I am actually focused on working hard on my production company and creating the business around challenging programs within different subject matter. I don’t know what the future holds.

What would you like viewers to take away from Man vs. Earth?
I hope they would sit back and be thoroughly entertained by a very dramatic show and learn a lot about avalanches, naturally, and we would like to educate at the same time. Underneath the drama, there are quite interesting facts about science and technology. And I hope they get a better understanding of getting in the snow and learn its full force.

Because of who you are, the son of Sir Richard Branson, does this affect your social life?
Not really.