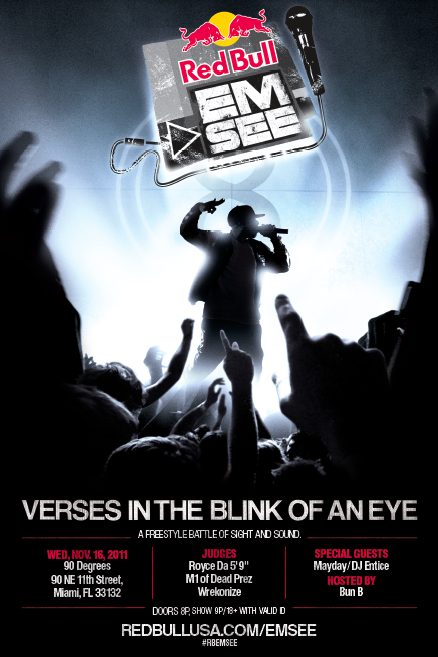 Red Bull EmSee is an invitation-only battle series designed to find the best freestyle rappers in the country and give them a
national platform to show their skills and earn acclaim. This year’s nine-city tour comes to its final stop here in Miami on November
16th at 90 Degrees in Downtownwith Bun B playing master of ceremonies.  Rap legends M1 of Dead Prezalong with Royce Da 5’9”
off Eminem’s Shady Records label and Miami’s own  Wrekonize winner of the Mtv Battle: The Takeover in Times Square II and
member of Hip Hop Band MAYDAY will be dishing out scores in the judges booth while DJ Entice spins labels on the turntables
throughout the night. Miami’s own MAYDAY will open up the show with a special Live Performance. The winner of the Miami
qualifier will advance to the finals in Atlanta later this year where they’ll vie for the national championship and an opportunity to
record with a headlining producer of his choice.  For information on other Red Bull EmSee tour stops, please visit
www.redbullusa.com/emsee.
Red Bull EmSee’s innovative battle format challenges MCs to bring the true freestyle spirit back by adding a twist to the
conventional head-to-head clash.  During the competition, MCs are posed with a variety of challenges designed to showcase
their technique,  creativity and dexterity.  In addition to spitting flows over beats and a capella, MCs are challenged to come up with
hard-hitting verses straight off the dome based on visual cues  and inspirations.
“The format of the challenge forces you to stick to the true essence of freestyling, which I  think gives it freshness and definite authenticity,” said reigning Red Bull EmSee National   Champion, Fowl.
Host: Bun B
Judges: Royce Da 5’9”, M1 of Dead Prez and Wrekonize
Special Performance by: MAYDAY
DJ: Entice
Competing MCs include: Dirty Dem, LMS, Surgeon, Johnny Storm, 4-Ize, Headcrack, Isaac and one Wild Card Slot