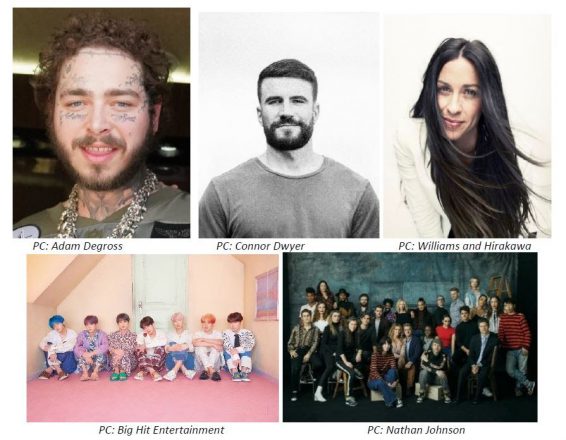 Miami: Jonas Brothers
dick clark productions and ABC today announced that multi-platinum selling artist Post Malone will join America’s most watched New Year’s Eve special, “Dick Clark’s New Year’s Rockin’ Eve with Ryan Seacrest 2020,” with a headlining performance live from New York City’s Times Square, just minutes before the ball drops. Making his Times Square debut, Post Malone will be joined by additional performers BTS, Sam Hunt and Alanis Morissette, performing for the first time with the cast of the hit Broadway musical “Jagged Little Pill” for America’s biggest celebration of the year. Additionally, as part of the broadcast, presenting sponsor YouTube will take a look back at the biggest trends on YouTube from the past decade plus make a surprise announcement. “Dick Clark’s New Year’s Rockin’ Eve with Ryan Seacrest 2020” will broadcast LIVE on Tuesday, December 31, beginning at 8:00 p.m. EST, on the ABC Television Network.
“We are so lucky to have Post Malone performing for the world right before the iconic ball drop,” said Mark Bracco, executive producer and executive vice president, programming and development, dick clark productions. “Add to that superstars like BTS, Sam Hunt and Alanis Morrissette and it promises to be a memorable New Year’s Eve in Times Square.”

“Ringing in the New Year with this unbelievable roster of talent is sure to be a magical event,” said Rob Mills, senior vice president, alternative series, specials and late night, ABC Entertainment. “We couldn’t be more excited to honor and share this iconic celebration with the world.”

“Dick Clark’s New Year’s Rockin’ Eve with Ryan Seacrest 2020” marks the 48thanniversary of America’s biggest celebration of the year and will include 5 ½ hours of special performances and reports on New Year’s celebrations from around the globe. Ryan Seacrest will lead the traditional countdown to midnight from Times Square in New York City, with live onsite reporting from award-winning actress and co-host Lucy Hale. Multi-platinum artist Ciara will once again ring in the New Year from the West Coast as host of the Hollywood Party, while award-winning Broadway actor Billy Porter will host the 4th annual Central Time Zone celebration, live from New Orleans.

Additionally, country artist Jessie James Decker will reveal the first-ever First POWERBALL Millionaire of the YearSM during this year’s live broadcast of “Dick Clark’s New Year’s Rockin’ Eve with Ryan Seacrest 2020.” Decker will provide live updates from the First POWERBALL Millionaire of the Year party throughout ABC’s live telecast and the big reveal announcing the winner will air just after midnight on January 1, 2020.

A diamond-certified GRAMMY® Award-nominated phenomenon, Dallas, TX artist Post Malone regularly rewrites history, blurs boundaries, and incites internet-breaking conversation with every move. Emerging in 2015 with a genre-less brew that inspired a movement, he delivered the diamond-selling “Congratulations” [feat. Quavo], achieved back-to-back #1 debuts on the Billboard Top 200, received countless multi-Platinum certifications around the world, and smashed one record after another with his Hot 100-topping hits. His 2019 third full-length, Hollywood’s Bleeding [Republic Records], represented an audience and critical high watermark. Not only did it arrive at Platinum status, but it also reigned at #1 on the Billboard Top 200 for four weeks and returned to the chart for a fifth week, making for the longest run atop the chart of 2019 and the first release to do so in over a year. It followed the immense success of the triple-Platinum beerbongs & Bentleys, which also landed at #1 a year prior. In the wake of beerbongs & bentleys, Post crushed a record in place for 54 years. He charted nine songs in the Top 20 of the Hot 100, notching “the most songs in the Top 20 of the Hot 100 ever.” Moreover, he also trounced the record for most simultaneous Top 40 Hot 100 hits with 14. As of 2019, his catalog comprises the GRAMMY® Award-nominated “rockstar” [feat. 21 Savage” (8x-platinum), “Sunflower (Spider-Man: Into The Spider-Verse)” [feat. Swae Lee] (8x-platinum), “I Fall Apart” (5x-platinum), “Psycho” [feat. Ty Dolla $ign] (5x-platinum), “White Iverson” (5x-platinum), “Better Now” (4x-platinum), and more. Not to mention, he sold out numerous arena tours and launched his own mega-popular Posty Fest in its second successful year in 2019. It all started with his triple-platinum influential 2016 debut, Stoney. With records under his belt that will likely never be surpassed and a generation of artists and audiences worldwide under his spell, Post Malone simply doesn’t stop.

The complete lineup airing Tuesday, December 31 on ABC is: