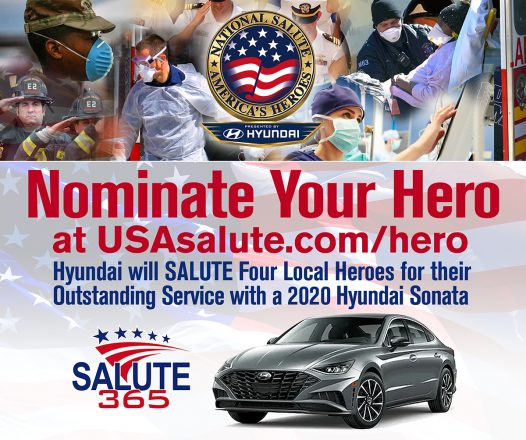 The National Salute to America’s Heroes (NSAH), presented by Hyundai, one of the country’s largest military air and sea shows, today announced the cancellation of this year’s event due to the COVID-19 pandemic.  The show had been scheduled to take place over Memorial Day weekend.

However, while announcing the postponement, the NSAH and Hyundai introduced a community-based nomination initiative, titled “Salute 365,” that will recognize local healthcare professionals, first responders and others who are tirelessly fighting and risking their own safety to care for members of the local community.

“We at the National Salute to America’s Heroes are always very focused on the health and safety of our guests, team members, and military partners.  As we align with recommendations and guidelines from local, state and global agencies, it was prudent to cancel the 2020 Hyundai Air and Sea Show,” said Mickey Markoff, executive producer of The National Salute to America’s Heroes, presented by Hyundai. “Given the regional and national concerns about COVID-19, we want to do what is best for the community at this time.”

Beginning immediately, NSAH is looking for nominations for four heroes who will be awarded new Hyundai Sonatas as recognition for their outstanding service. The NSAH will select winners in each of the following categories: healthcare professional; first responder; unsung community hero, and present them with a 2020 Hyundai Sonata on Memorial Day.

“Because our show is so closely connected with Memorial Day, we think it’s fitting to pay tribute on that day to the deserving members of our community who are on the front lines fighting against this world-wide pandemic and express our appreciation and gratitude for their service,” added Markoff.

“We’ve been a proud partner of the National Salute to America’s Heroes since its inception,” said Angela Zepeda, chief marketing officer, Hyundai Motor America. “In keeping with this terrific partnership, we’re already looking forward to next year’s event but wanted to do something now that shows our commitment to the NSAH while recognizing some of the local heroes working to put this pandemic behind us. Hyundai has always been a brand that does the right thing for people, so we are pleased to be a part of this Salute 365 initiative and recognizing those unsung heroes during this crisis.”

According to Markoff, “the initiative will seek nominations from the general public through traditional/non-traditional media sources requesting stories of deserving individuals who through their actions during this crisis have displayed incredible courage and emerged as heroes in their community.”

Nominations in all categories can be made at USASalute.com/hero.  Winners will be picked by May 15 and announced over Memorial Day weekend.