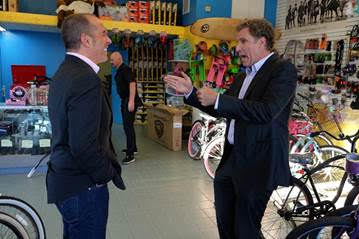 Jerry Seinfeld is joined by Will Ferrell for coffee, a trip to a local playground and a visit to a nearby surf shop in the season 7 finale of Jerry Seinfeld’s series, “Comedians in Cars Getting Coffee,” NOW STREAMING ON CRACKLE. The duo rides around Los Angeles in a 1970 Plymouth SuperBird and chats about Will’s “Saturday Night Live” audition, Greece, sewage, cats and much more!