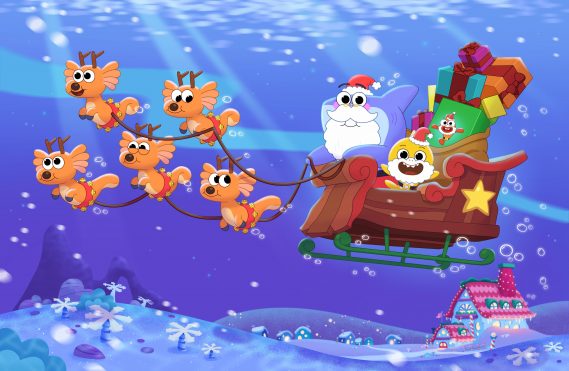 Co-produced by Nickelodeon Animation Studio and SmartStudy, the global entertainment company behind the beloved children’s brand Pinkfong, Baby Shark’s Big Show! (26 half-hour episodes), will follow Baby Shark and his best friend William as they journey on fun-filled comedic adventures in their community of Carnivore Cove, make new friends and sing original catchy tunes along the way.

Meet the inhabitants of Carnivore Cove:

In “Baby Shark’s Big Fishmas Special,” the season’s hottest toy—Burpin’ Bubbz—is at the top of Baby and William’s Fishmas wish lists, and when Santa Jaws goes missing, it’s up to them to save the holiday. Following the premiere, the special will be available on Nick Jr. On Demand and Download-To-Own services, as well asNickJr.com and the Nick Jr. App, which will also feature short-form content.

Baby Shark launched on YouTube in November 2015 and took the world by storm, amassing 7.1 billion views and becoming the most-watched video in the platform’s history. With music, characters, story and dance all combined together, the song recorded a 20-week-streak on the Billboard Hot 100 and spawned a viral phenomenon #BabySharkChallenge, generating over one million cover videos around the globe.

Founded in June 2010, SmartStudy is a global entertainment company moving beyond the limits of platforms to create original content across children’s education, games and animation. Through SmartStudy’s beloved children’s brand, Pinkfong, the company produces modern-day songs and stories to provide stimulating, fun, learning experiences to children.

Pinkfong is a global entertainment brand that creates award-winning kids’ content for families around the world. Pinkfong has over 5,000 songs and stories within its vast library of children’s content, which can be accessed on the App Store and Google Play, as well as on YouTube and Amazon Video. Pinkfong’s accolades include the Amazon Video Direct Star, YouTube’s Diamond Play Button and Google Play’s Best Family App of 2014-2017.