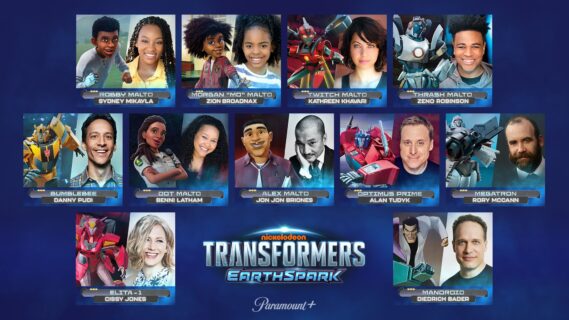 Nickelodeon, Paramount+ and Entertainment One (eOne) today announced the voice actors breathing new life into original and franchise favorite characters in the upcoming Paramount+ original animated series Transformers: EarthSpark. The all-new animated series (26 episodes) introduces a new generation of Transformers robots–the first Transformers robots to be born on Earth–and together with the human family who welcomes them in and cares for them, they’ll redefine what it means to be a family. Transformers: EarthSpark is set to debut exclusively on Paramount+ in the U.S. in November, and on Paramount+ and select Nickelodeon channels internationally. The new series joins the globally recognized Transformers powerhouse franchise.

The new voice cast and their Transformers: EarthSpark characters are:

Hasbro, maker of the Transformers: EarthSpark toyline, and a production partner on the animated series, also participated in the panel presentation.

Transformers: EarthSpark is created and co-executive produced by Dale Malinowski (Rise of the Teenage Mutant Ninja Turtles) and executive produced by Ant Ward (Rise of the Teenage Mutant Ninja Turtles). The series is developed for television by Claudia Spinelli, Senior Vice President, Big Kids Animation, Nickelodeon. Production is overseen for Nickelodeon by Mikiel Houser, Executive in Charge of Production and for eOne by Kari Rosenberg.

The TRANSFORMERS brand is a global powerhouse franchise with millions of fans around the world. Since 1984, the battle between the Autobots and Decepticons has come to life in movies, TV shows, comic books, innovative toys, and digital media, bringing incredible “MORE THAN MEETS THE EYE” experiences to fans of all ages. The brand’s enduring connection is made possible by its rich storytelling and characters: the heroic Autobots who seek to protect all life, and the evil Decepticons who seek to conquer the universe. The TRANSFORMERS brand is a Hasbro franchise.

Nickelodeon, now in its 43rd year, is the number-one entertainment brand for kids. It has built a diverse, global business by putting kids first in everything it does. The brand includes television programming and production in the United States and around the world, plus consumer products, digital, location-based experiences, publishing and feature films. For more information or artwork, visithttp://www.nickpress.com. Nickelodeon is a part of Paramount’s (Nasdaq: PARA, PARAA) global portfolio of multimedia entertainment brands.

Paramount+, a direct-to-consumer digital subscription video on-demand and live streaming service, combines live sports, breaking news and a mountain of entertainment. The premium streaming service features an expansive library of original series, hit shows and popular movies across every genre from world-renowned brands and production studios, including BET, CBS, Comedy Central, MTV, Nickelodeon, Paramount Pictures and the Smithsonian Channel. The service is also the streaming home to unmatched sports programming, including every CBS Sports event, from golf to football to basketball and more, plus exclusive streaming rights for major sports properties, including some of the world’s biggest and most popular soccer leagues. Paramount+ also enables subscribers to stream local CBS stations live across the U.S. in addition to the ability to stream CBS News Streaming Network for 24/7 news, CBS Sports HQ for sports news and analysis and ET Live for entertainment coverage.