Nickelodeon is letting kids’ voices be heard this election season with the return of its bellwether “Kids’ Vote” poll and a brand-new Nick News: Kids Pick the President special hosted by entertainment powerhouse Keke Palmer. Beginning today, kids can cast their vote for who they want to be the next president at KidsPickthePresident.com, and the results of the poll will be revealed during the Nick News TV special premiering Tuesday, Oct. 27, at 7 p.m. (ET/PT). The Kids Pick the President “Kids’ Vote” is an informal non-scientific poll, meant for entertainment purposes only.

“Through Kids Pick the President and the return of Nick News, Nickelodeon continues to inform and educate children on the democratic process and the importance of voting,” said Magalie Laguerre-Wilkinson, Vice President of News Programming, Nickelodeon and Executive Producer of Nick News. “Although our audience is not of voting age, we still have a responsibility to help amplify their voices around the issues that are most important to them in a space they can call their own, so they know that they too can make a difference by playing a role in the electoral process.”

Added Laguerre-Wilkinson, “We are thrilled to have Keke Palmer join us as host of our special and connect with young viewers in the way that only she can. Keke has been a part of our Nick family since she was a kid herself, and we’re so proud to have watched her grow into a powerful voice for her generation.”

“Voting in my first election when I was 18 was extremely important to me and now more than ever, it’s crucial that this next generation of kids grow up with an understanding of our political system and how they can be agents of change,” said Palmer.  “I’m so proud to be a part of the Nickelodeon family and this special, which will teach kids about the election and empower them to stand up for what they believe in.”

Beginning today, kids can visit KidsPickthePresident.com to cast their vote for Joseph R. Biden or Donald J. Trump to be the next President of the United States, download an “I Voted” sticker/badge and learn more about the Nick News special. One vote will be tabulated per household device. The “Kids’ Vote” results will be announced onTuesday, Oct. 27, during the 7 p.m. (ET) telecast of the Nick News: Kids Pick the President special. 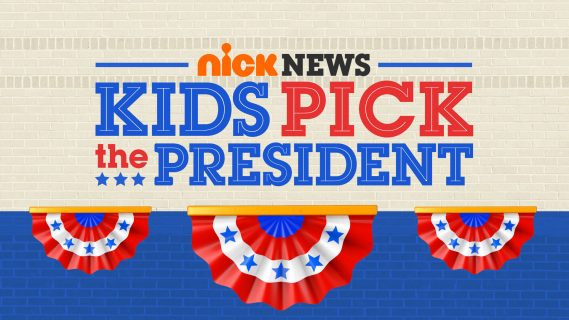 The hour-long Nick News: Kids Pick the President special will provide a thorough overview of the basics of voting and give kids a platform to voice their concerns on the issues they care about most in the 2020 presidential election, such as COVID-19, racial equality and the environment. The program will also feature child, adolescent and family psychologist Dr. Jen Harstein and youth activists, including: Zoë Jenkins, founder of a DEI initiative in her Lexington, Ky., high school; and Mari Copeny (‘Little Miss Flint’), who continues to raise awareness about the ongoing water crisis in her hometown of Flint, Mich., and has expanded her efforts to communities across the nation dealing with toxic water.

To further support and help educate kids, Nickelodeon has partnered with: iCivics, the nation’s premier civic education provider, founded by U.S. Supreme Court Justice Sandra Day O’Connor, that reaches over 7.5 million students in all 50 states each year; Encyclopedia Britannica’s LumieLabs, to develop a civics education curriculum and provide their video-creation and storytelling software to elementary students from Title 1 schools in 15 states across the country; the National Association for Media Literacy Education, an organization that aims to make media literacy highly valued and widely practiced as an essential life skill, to help kids sort through all of the election news; and UNICEF Kid Power, to create an election-themed Kid Power Up video kids can play to unlock critical support through UNICEF, such as internet connectivity, therapeutic food packets, family meals, and medical supplies to children in global and local communities.

Nick News: Kids Pick the President will simulcast across Nickelodeon, TeenNick and Nicktoons, and be available on Nickelodeon YouTube, Nick On Demand, the Nick App and the Nick Pluto TV channel following the premiere.

The Kids Pick the President “Kids’ Vote” is an initiative Nickelodeon has held over the last 36 years and for the last nine presidential election cycles. Beginning with the net’s inaugural “Kids’ Vote” in 1988, kids have correctly chosen the next U.S. president in advance of the national election six out of the last eight times.

Keke Palmer is an actress, music artist, host, author, humanitarian and a passionate voice for her generation. She was nominated for a 2020 Emmy Award for co-hosting the popular daytime series, GMA3: Strahan, Sara, and Keke and also hosts Singled Out on Quibi, based on the hit MTV series from the ‘90s. Palmer most recently hosted the MTV VMA Awards and starred in the 2019 blockbuster hit film Hustlers, opposite Jennifer Lopez, Constance Wu and Cardi B. She began her career with a breakout role in Akeelah and the Bee and has since starred in over 20 feature films including box office mega-hit Ice Age: Continental Drift, Joyful Noise, Brotherly Love, and Imperial Dreams. She’s known for her work on the small screen with past TV credits including True Jackson, VP for which she received four NAACP Image Awards, Lee Daniels’ Star, Berlin Station, Grease: Live, A Trip to Bountiful, Full Circle, CrazySexyCool: The TLC Story, Scream Queens, and Masters of Sex. She made history as the youngest and first Black Cinderella in Rodgers and Hammerstein’s musical, Cinderella on Broadway. Keke is the founder of her own record label, Big Bosses Ent, and prolifically records and releases music, most recently the hit songs “Dreamcatcher,” “Snack”,  “Virgo Tendencies” and “Sticky” for which she created the viral sensation “Sticky Dance Challenge.”