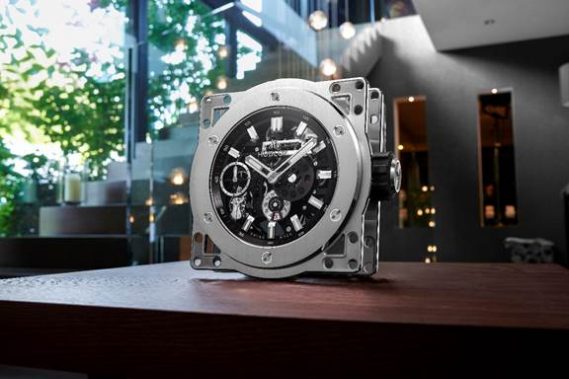 The watch that inspired a clock: working together with the Jura-based L’Epée manufacture, Hublot has produced an oversized version of its famous MECA-10 manufacture movement for use in a table clock.

Hublot’s unveiling of its MECA-10 movement in January 2016 left watch enthusiasts stunned. The manufacture had reinvented the manual movement, offering peerless performance as well as a unique style inspired by the Meccano construction system. The unusual skeleton architecture gives the movement an arresting three-dimensional depth, which is clearly visible through the bridges and case back. Its exceptional 10-day power reserve – now an imperative for any decent manual calibre – is displayed on a disc that can be read on the dial.

Strikingly similar to the original, the Hublot MECA-10 Clock is, in essence, an oversized version of its predecessor. Its spacious 19.60 by 18.10 cm case houses the precious movement, which comes in two versions. The first features Meccano-inspired angles and a ring in polished satin-finished steel and transparent composite. The second is covered with black PVD and the bridges supporting the gear trains are also coated in black. The notched crown at 3 o’clock is rubber-coated for a better grip when manually winding the movement. Like the wristwatch version from which it takes its inspiration, the MECA-10 clock movement features a 10-day power reserve which is displayed on an indicator at 6 o’clock.