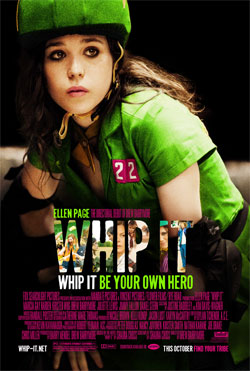 Miami Special Screening Only: WHIP IT!

* There will be no after-party for this screening. Click here to RSVP.

This screening is hosted by Fox Searchlight and Gen Art members will receive preferential seating as long as you arrive by the designated time.

Synopsis:
For years, Bliss Cavender (Academy Award® nominee Ellen Page) has been dreaming of escaping her tiny, truck-stop of a town Bodeen, Texas. Unfortunately her devoted, beauty pageant obsessed mother (Academy Award® winner Marcia Gay Harden) is convinced that Bliss can only succeed in life if she wins the crown at the local Miss Blue Bonnet Pageant, but the awkward outsider knows there’s something bigger and better out there. When Bliss sneaks off to the big city of Austin with her best friend Pash (Alia Shawkat) she discovers a world unlike anything she could ever imagine: roller derby, with its girl-power-meets-punk-rock spirit and its liberating celebration of wild individuality.

Inspired by the likes of Maggie Mayhem (Kristen Wiig), Bliss secretly tries out for a spot on the Hurl Scouts, a rag-tag team of scrappy underdogs. Soon she’s trading in her gowns and crowns for skirts, skates and scrapes becoming her alter ego, Babe Ruthless. Leading a precarious double life, Bliss may be a waitress at Bodeen’s Oink Joint by day, but by night, she’s becoming the fastest thing on eight wheels. Now she’s doing things she never dreamed of — fearlessly facing off with bad-ass rivals like Iron Maven (Academy Award® nominee Juliette Lewis) and falling for a boy in a band (singer/songwriter Landon Pigg) — while trying to be a heroine to her new friends and teammates. But when her secret gets out, Bliss will face her toughest fight yet: to take control of the future . . . on her own terms.