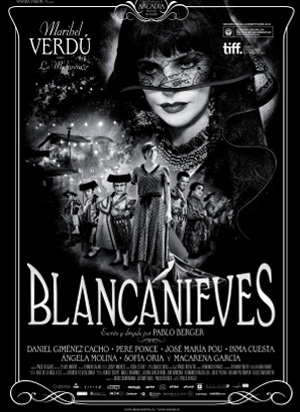 Tickets are $11.50 and under at the box office and on the Cinema’s website at www.gablescinema.com

Starting Friday, April 12, the Coral Gables Art Cinema will present the Exclusive Miami Premiere of the acclaimed Spanish-silent film Blancanieves in 2K Digital Cinema Projection. Set in a romanticized 1920s Seville, Director Pablo Berger’s (Torremolinos 73) Snow White is named Carmen (played by a majestic Macarena García) and is the daughter of a once-renowned Spanish-matador (played by a dashing Daniel Giménez Cacho). Audiences will quickly become intoxicated by this larger than life story and learn of Carmen’s uproarious upbringing by her flamenco dancer grandmother (played by the legendary Ángela Molina), her misery at the hands of her tyrannical stepmother Encarna (played by a treacherous Maribel Verdú) and secret schooling by her father in the art of bullfighting. The story unravels after a disastrous event, which forces Carmen to escape the custody of her evil stepmother and leads her to join a traveling troupe of bullfighting dwarves. Eventually rising to fame in the “corrida” under the stage name “Blancanieves,” the young Spanish bullfighter begins to gain notoriety and become a household name. However, once the news of Carmen’s success reaches Encarna, the final showdown begins.

The lush scenery, vigorous score and enthralling musical performances in Blancanieves create a dark and magical fantasia. With little use of dialogue cards and expressive performances, Berger spins an eventful tale that is faithful to the original yet has its own quirky identity. Standout performances include: an alluring and fearless García as the “Fairest of Them All”; a smoldering Verdú as the stepmother, who offers a vivid portrait of an ambitious woman consumed by her longing for luxury and status; and a striking flamenco number by Molina. The Chicago Sun-Times raves, “This film is a wonderment! A striking… full-bodied, visually stunning film.”

Gables Cinema Director Robert Rosenberg says, “Blancanieves will surely plunge South Florida audiences into a fantastical realm where the chatter of voices is replaced by the intoxicating sounds of the soul – this film should not be missed!” Tickets for all screenings are $11.50 and under and are available for purchase in advance  on the Cinema’s website at www.gablescinema.com or in person at the box office during regular screening hours. For more information visit the website or the Cinema’s Facebook page,   www.facebook/gablescinema, or contact the Cinema at info@gablescinema.com or (786) 385-9689. Screen times will be announced shortly.

The Coral Gables Art Cinema is South Florida’s leading state-of-the-art venue for experiencing independent, alternative and international film, offering first-run, seven-day-a-week showcase presentations in both 35mm and true industry-standard theater quality digital projection. It is located at 260 Aragon Avenue, directly across the street from Books & Books, on the western end of the ground floor of the Museum Parking Garage.

Funding for the Coral Gables Art Cinema comes in part from the City of Coral Gables; the Coral Gables Community Foundation and its Perrin Fund; the Knight Foundation; Steven Krams and Midge Blumberg-Krams; Bacardi; the Miami-Dade County Department of Cultural Affairs and the Mayor and Board of County Commissioners; and the many businesses, individual donors and members who contribute to the Cinema’s work.