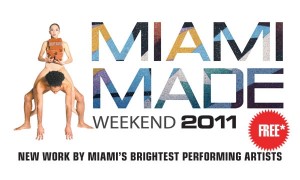 MIAMI MADE expanded from a commissioning program into a full weekend of events in 2009. Each year, the selected Miami Made artists and their works represent a diverse mix of music, dance and theater disciplines.

The Adrienne Arsht Center for the Performing Arts of Miami-Dade County, now celebrating its Fifth Anniversary Season, and Miami Light Project proudly announces MIAMI MADE WEEKEND 2011, an annual showcase of new, innovative work, created by artists living and working in South Florida. Taking place from March 4-6, MIAMI MADE WEEKEND will feature the work of 11 immensely talented performing artists in our community who are continually expanding the boundaries of the traditional performing arts.

MIAMI MADE WEEKEND 2011 will feature world premieres and works in progress as well as public readings of new plays by South Florida playwrights, panel discussions with performing arts professionals from all over the U.S. and meet-and-greet opportunities with the artists.

ADMISSION TO THE MIAMI MADE WEEKEND 2011 EVENTS ARE FREE. Subject to availability.

A $35 VIP FESTIVAL PASS is also available and includes priority access and guaranteed seating to every MIAMI MADE WEEKEND event.

MIAMI MADE WEEKEND expanded in 2009 into a full weekend of performances. It now embodies two signature programs: Here & Now: 2011, the annual showcase of world premiere works commissioned, developed and presented jointly by the Adrienne Arsht Center and Miami Light Project; and Incubator, a series of works-in-progress developed through the Adrienne Arsht Center’s commissioning program.

SI VAS A SACAR UN CUCHILLO, USAlo / If you are going to pull a knife, USE it by Carlos Caballero and Elizabeth Doud – WORLD PREMIERE!

For their second performance collaboration titled, SI VAS A SACAR UN CUCHILLO, USAlo / If you are going to pull a knife, USE it, Carlos Caballero and Elizabeth Doud will employ the texts of Samuel Beckett to talk about the petroleum industry, unemployment-itis and mermaid suffrage.

A graduate of Instituto Superior de Arte de la Habana in Cuba, Carlos Caballero is the proud winner of the New Times and the Nuevo Herald “Best New Actor” Award. A performer with Teatro El Publico and La Ventana, Caballero has worked internationally in theater, film and television. Last seen in an adaption of A Streetcar Named Desire with Teatro Miami, Caballero is currently working on a theater production of Hilo. He is also working on another collaboration with Elizabeth Doud – Sipping Fury from a Teacup.

Director of the Miami-based Las Negras Theater Collective, Elizabeth Doud arrived in Miami via Spain and Brazil and joined forces with Giovanni Luquini Performance Troupe. Her works include a collaboration with partner Jennylin Duany on Cabaret Unkempt, which premiered at the Arsht Center, and the libretto for IDALINA, a dance-theater project between Miami Light Project and the Arsht Center, which received support from the MAPFUND. Doud’s writing has been published in various print and online journals. Most recently, she has developed a new work entitled Sipping Fury from a Teacup. Doud is a University of Miami graduate with a Master of Fine Arts in Creative Writing.

Puerto Rican Actor/Writer/Director Teo Castellanos is the author of War, Revolution, and the Projects, a one-man trilogy, and NE 2nd Avenue, a one-man show based on Miami characters which was awarded the International Cultural Exchange Grant by Miami-Dade County Cultural Affairs and the Fringe First Award at the 2003 Edinburgh Fringe Festival.

A lively cast featuring dancers, a musician, and a spoken word artist will take you on an interdisciplinary jaunt to convey the labeling and stigma that come with sexual roles and gender–from old-fashioned double standards, to dating, to orientation, to the death of chivalry. (Trust us, it’s a good thing it’s dead.) Ultimately, the audience will realize where the true fallacy lies and why sometimes the best thing one can do is get pissed, laugh, and finally let go. This performance contains nudity.

Miami native, Pioneer Winter choreographed an adaptation of Godspell, which was performed at the International Fringe Arts Festival in Edinburgh, Scotland (2007). Winter has trained extensively with Michael Langlois, Brigid Baker, Edwin and Gaile Holland. Most recently, Pioneer conceived and directed Reaching the Surface, a performance featured in The Miami Herald, South Florida Gay News and WLRN’s “ArtStreet.” He holds a Master of Public Health from Florida International University and a Florida Dance Masters accreditation.

THE BODY IS PRESENT by Ana Mendez – WORLD PREMIERE!

The Body is Present is a dedication in homage to Cuban-American artist, Ana Mendieta, who died tragically in September 1985. As told in dream, the performance explores the mystery of Mendieta’s untimely death, when she fell from a New York City apartment window.

Ana Mendez is a Miami native and graduate of the University of Illinois with a bachelor’s degree in Fine Arts in Dance. With Psychic Youth, Inc., a performance group collaborative, Mendez produced A Summoning and Walking Spell. Her commissioned works include Valley of the Queen at Miami Art Museum and Parrucca presented by DACRA. Her works have been showcased at the de la Cruz Contemporary Art Space, Locust Projects, Spinello Gallery, and at the Light Box with Miami Light Project.

My Friend Nina by Sipiwe Moyo

An original, solo-performed theatre piece by Sipiwe Moyo, My Friend Nina is a journey of four characters that are linked through one unifying element: their love and admiration for Nina Simone. Listening to her soulful, loving, and often gut-wrenching melodies, “Nina” carries the characters through life and desperate circumstances. The characters have grown, loved, and cried with “Nina”. The stories in succession paint a picture of the complex human experience—the sublime, the unjust, and the downright sexy—trials which can only be appreciated and resolved by the diva messiah herself: “Nina”.

A graduate with honors from New York University’s Tisch School of the Arts, Sipiwe Moyo holds a Bachelor of Fine Arts in Acting and a minor in Applied Theatre. Trained at the Institute for Integrative Nutrition, Moyo practices health counseling when she is not dancing.

AGAINST ALL ODDS by Beatriz Montanez

THEATRE OF THE OPPRESSED (TOP Miami) directed by Beatriz Montanez presents “Against All Odds”- the journey of an artist in our competitive money-driven society.  An eclectic medley of Miami artists from all corners of the Americas join forces to explore the many challenges local artists face in our current economic climate. This revolutionary group fosters democratic and cooperative forms of interaction through theater. Join us for a stimulating theatrical dialogue that explores the future of the arts in our community, while being captivated by an enticing performance filled with imagery and color.

Trained by Prometeo, one of Miami’s premiere Spanish-language theater groups, Beatriz Montanez, has received several notable distinctions, including The Bill Hindman Award, “Theatre’s Top 10” from The Miami Herald and “Top Break-Through Performance” by El Nuevo Herald. Montanez has collaborated with Megan Morrison and Tony Plana (Ugly Betty) at East L.A. Classic Theatre. She has also worked with various organizations throughout Miami including Miami Children’s Hospital, Coconut Grove Cares, The Barnyard, VSA Arts of Florida, Hollywood Arts and Culture Center, Arts for Learning, Creciendo Juntos, and In Synch. She has directed more than 100 productions in English and Spanish, to represent underserved communities.

Requiem for a Mustard Seed Closes in Song ACT 1 is a dance theater work spurred by an investigation of items lost and found. The work will feature a cadre of movement artists, deconstructed Medea, musical installation, and series of maverick hand held icons.

New World School of the Arts and Barry University graduate, Letty Bassart, has developed multiple works, including Flower Chronicles (2007), Salt (2008) and 100 (2009). Bassart’s commissioned works include Good, God, Go Remnants and Umbrellas (2009), Inanimate Undertows (2005), and Toying with Amusement (2008). She is the proud recipient of the Artist Access Grant (2009), NEA Dance Journalism fellowship (2010), as well as a Miami-Dade Choreographer Fellowship (2008, 2010, 2011). In addition to her work as a choreographer, Bassart is a writer and Director of Artist Services with Arts for Learning.

Clandestine, is a dance theater piece which uses montage, performance art, dance and theater to explore clandestine acts as a result of sexual suppression in individuals.

Miami-based, Cuban-born dancer/choreographer Liony Garcia is a founding member and current company member of Rosie Herrera Dance Theater, whose work has been presented in 2009 and 2010 at the prestigious American Dance Festival and, in January 2011, at the Adrienne Arsht Center. As a member of the Los Angeles-based repertory company BodyTraffic, Garcia has premiered new works by choreographers Guy Weizman and Roni Haver. His choreography has been showcased at New World School of Arts, Florida Dance Festival’s Winterfest 2009, Dot51 gallery and Cando Arts Co-op. Garcia recently choreographed a solo performance in collaboration with New World Symphony Orchestra. Garcia is a graduate of New World School of the Arts and holds a Bachelor of Fine Arts in Dance.

PLEASE DON’T HATE ME! is a transdisciplinary campaign and series of cultural interventions, social experiments and performances conceived for the City of Miami by performance artist Octavio Campos and Camposition to promote acceptance, not intolerance – encouraging EVERYBODY to look for the heroes within themselves to fight for equal rights creating a catalyst for social change. Funded by Arsht Center’s Miami Made Incubator and Miami Light Project.

For the past 20 years, Octavio Campos has been collaborating in theater, dance, music, television, circus, cabaret, film and the visual arts, with over 100 professional credits. He studied at SUNY Purchase, Martha Graham School , Folkwang Schule of Pina Bausch, and the Lincoln Center Director’s Lab. Campos has received numerous grants and awards for his work, notably at the Berliner Theater Festival 2001, World Expo Hannover (2002), Miami Choreographers Fellowship (2005 & 2009) and Interdisciplinary Arts Fellowship for the State of Florida (2009).

A dedication to the memory of Rubin Stacy, Hang Time por Rubin Stacy, is the account of a homeless South Florida tenant farmer who was lynched in 1935 by an angry mob en route from Fort Lauderdale to a Miami-Dade prison. This premier public sharing of Hang Time Por Rubin Stacy combines blues and hip-hop while fusing comedy, poetry, memoir, movement & tragedy to artfully explore race in America.

Summer Hill Seven builds on the genre of Poemedy he began with his first book – Notes of a Neurotic! and Platanos & Collard Greens (longest running play in the history of hip-hop theatre) with a tour of this new work throughout South Florida high schools, U.S. colleges and regional theatres.

Admission to all MIAMI MADE WEEKEND events is FREE (subject to availability).

A VIP FESTIVAL PASS can also be purchased for $35 and includes priority access and guaranteed seating to every MIAMI MADE WEEKEND event. VIP FESTIVAL PASSES are available online at: www.arshtcenter.org, in-person at the box office window, or by phone: (305) 949-6722. VIP FESTIVAL PASS holders are asked to arrive a minimum of 10 minutes prior to scheduled showtime.

Prices, artists, dates, times, and program are subject to change without notice.