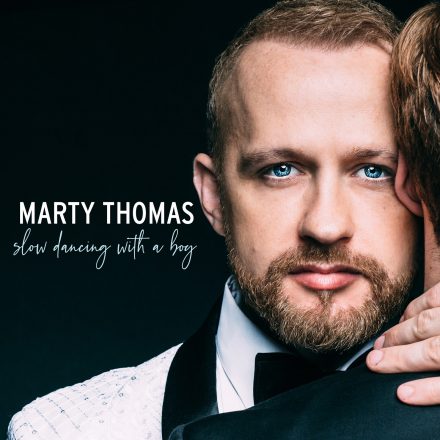 Broadway Records announced today that Marty Thomas: Slow Dancing With a Boy will be released digitally and in stores on Friday, December 6, 2019. The album is currently available for pre-order at www.BroadwayRecords.com and Amazon.com

As a child he famously won Ed McMahon’s Junior Star Search over then-unknown Britney Spears. As an adult, Marty Thomas created a name for himself on Broadway in Xanadu, Wicked and The Secret Garden, on television’s Grace & Frankie, and has been a staple of the New York City nightlife for well over a decade. With his sophomore album “Slow Dancing With a Boy”, Marty takes his rightful place among the vocal icons that have long inspired him. Produced by Jamey Ray, this album explores the music of a young closeted mans coming of age memories, and dares to question the possibility of having lived those memories honestly and openly. Fusing pop and musical theatre music with a song stack that runs the gamut of Vanessa Williams to Les Miserables, this album features collaborations with The Voice’s Rachel Potter, Voctave’s Jamey Ray and viral sensation Mykal Kilgore. Whether you want to slow dance with a boy, a girl, or just dance by yourself for a while, this album celebrates love, hope and the healing and redemptive power of music.

“My longtime friend Marty has always inspired me with his voice, his brilliant musicality and his authenticity. I am so thrilled to release this phenomenal album. If you haven’t discovered Marty Thomas yet, you are in for such a treat.” – Broadway Records A&R Director Robbie Rozelle

GET SOCIAL WITH BROADWAY RECORDS: