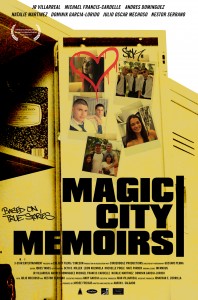 Magic City Memoirs, the hometown film, making its World Premiere at the 2011 Miami International Film Festival, has been the darling of this years program. Following record breaking sales, MIFF opened up a second screening for Saturday March 12 to accommodate those who were unable to purchase tickets for the Friday Night Red Carpet Premier, which sold out in less than one week.

Magic City Memoirs will be holding a press conference with the Miami International Film Festival at the Royal Palm hotel at 11am Friday morning, March 11th. Cast and crew will be available to speak with the media about this long awaited premier. The highly anticipated event at The Historic Gusman theatre will begin at 6pm with a Red Carpet gathering followed by the screening of the film at 6:45pm. MCM filmmakers will be hosting a private VIP party to celebrate with their supporters the long journey that they all shared in this labor of love project. The after party will be held at Villa 221 n Downtown Miami. Bacardi, Versailles, Normans 180 and Asia de Cuba have all lined up as sponsors. Front and center of this All-Star Miami event will be Academy Award Nominated Actor/Director and Executive Producer of Magic City Memoirs, Andy Garcia, along with MCM director Aaron J. Salgado and producer Jaydee Freixas of which the 3 will be awarded the Lexus Pursuit of Excellence award Saturday night at the Moore Building at 7pm.

The film is a coming of age drama that tells the story of three high school friends, who indulge in reckless behavior that finds them on the brink of either their graduation or their mortality. Their hopes hang in the balance – – one with academics, one with sports, and one with drugs. The film is based on true stories from director?s experiences growing up in the Miami private high school scene. Magic City Memoirs, based on and shot on location in Miami stars Natalie Martinez, star of the new hit primetime show Detroit 1-8-7 and Dominik Garcia Lorido, co star of City Island

Cast members also include J.R. Villarreal, who starred in the feature film Akeelah and the Bee as well a number of guest episodes in primetime shows such, CSI Miami, House and Cold Case among others. Emmy Award winning actor Jordi Villasuso, who co-starred in The Lost City, and is now playing a major role in the ABC Daytime hit series, All My Children. Michael Cardelle, who also co-starred in Jamaica Motel and has had guest roles in primetime shows such as Cold Case and Criminal Minds. The cast is rounded out by veteran actors Julio Mechoso whose long Hollywood resume includes substantial roles in Bad Boys, Jurassic Park III and Little Miss Sunshine and Nestor Serrano, who has had a starring role in Season 4 of the Fox hit 24, guest roles in CSI Miami and the X Files, and also starred alongside Al Pacino and — Magic City Memoirs is a production of Enlight Films, a Miami based Independent Production Company headed by filmmakers Aaron Salgado, a graduate of the prestigious Directors Program at NYU, and Jaydee Freixas, a graduate of The University of Miami Film School. Enlight Films also produced the award winning film Jamaica Motel.

Magic City Memoirs will screen its World Premiere on Friday, March 11, 2011 at 7pm at The Gusman Theatre for the Performing Arts