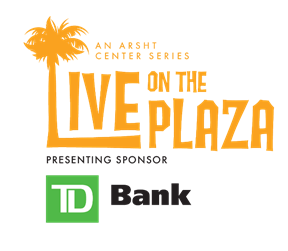 More artists to be announced soon!

The Adrienne Arsht Center for the Performing Arts of Miami-Dade County (@arshtcenter) is pleased to announce the return of the LIVE ON THE PLAZA series to the Thomson Plaza for the Arts for the 2022-2023 season. The fan-favorite outdoor concert series features performances by a lineup of all-local artists in the heart of downtown Miami, starting with LOS WIZZARDS on October 6 and BRANDON GOLDBERG TRIO on October 16. The series continues November 3 with SEAFOAM WALLS and on December 14 with TAL COHEN TRIO.

More local artists to be announced soon! Sign up here to receive Arsht Center emails and select “Upcoming Events and Performances” to be the first to know when tickets are available.

Doors open at 6 p.m. with light bites and beverage service for purchase. Happy hour pricing is available until 7 p.m. Each performance begins promptly at 7:30 p.m. and lasts approximately 60-70 minutes without intermission.

Tickets to all performances are $20 per person and can be purchased by tables of one, two, three or four beginning September 9 at noon. Tickets may be purchased online at arshtcenter.org or at the Adrienne Arsht Center box office by calling (305) 949-6722.

Live on the Plaza at the Arsht Center is made possible with the support of presenting sponsor TD Bank. Miami New Times is the media sponsor.

Based in Miami, the seven colorful and culturally diverse musicians of Los Wizzards came together through a series of open mic nights in 2016. Los Wizzards’ magic lies in the way they invite audiences into the conversation with elements of funk, rock, pop, jazz, reggae, hip-hop and salsa. Through festive, honest lyrics and a sophisticated approach to popular genres, their anthems cast a spell that compels listeners to dance. Their power is rooted in their devotion to artistic discipline, constant experimentation and a firm refusal to restrict their sound to one genre. In 2020, that identity led them to win the honor of representing Miami on the city’s biggest stage as the Miami Heat’s official house band. Los Wizzards’ music is a celebration of life, Miami and the powerful magic that results from a playful and culturally diverse collaboration.

“…a gifted pianist and composer, a sensitive interpreter, and an inventive improviser who is deeply immersed in jazz.” –JazzTimes

Miami-based jazz pianist Brandon Goldberg, now 17 years old, has been playing piano and making music since he was three years old. With “ample dexterity and wise-beyond-his-years sound” (JAZZIZ), Brandon found his passion for jazz by listening to his favorite artists including Herbie Hancock, Bill Evans, Oscar Peterson, Charlie Parker, Miles Davis and John Coltrane. He has performed at festivals including the Newport Jazz Festival, Litchfield Jazz Festival and Bravo Niagara Festival of the Arts.

Brandon’s debut album, LET’S PLAY!, was released in 2019 to rave reviews garnering four stars from DownBeat Magazine and reaching #7 on the JazzWeek charts. It was recognized by DownBeat Magazine as one of the top albums of 2019.

Goldberg’s second album, In Good Time, released in September 2021 garnered rave reviews from London Jazz Newsand four stars from All About Jazz and Jazzwise. In Good Time is also recognized by DownBeat Magazine as one of the top albums of 2021.

Founded in 2014 by singer and guitarist Jayan Bertrand, Seafoam Walls expanded with the addition of bassist Joshua Ewers, multi-instrumentalist Dion Kerr and drummer Josue Vargas. The band’s debut album got a boost in national attention when Thurston Moore of Sonic Youth released it on his Daydream Library Series label. This attracted the attention of outlets such as Spin and Pitchfork, who were uniform in their admiration. But even with the band’s apt and efficient genre-branding, XVI remains otherworldly and addictive — kind of like the city that spawned it. Seafoam Walls is a completely original, entirely chillable blend of indie rock, dream pop and Caribbean jazz-gaze.

Tal Cohen is a Grammy Award-winning jazz pianist currently residing in Miami. He has received much acclaim, including winning the Barry Harris National Piano Competition and receiving the prestigious Freedman Fellowship. He performed to a sold-out crowd at the Sydney Opera House. Recently, Cohen has played across the globe with Terence Blanchard, Greg Osby, Ignacio Berroa, Joe Lovano and others. He currently leads his own ensemble, which has performed at iconic jazz festivals and venues such as Jazz Bez in Ukraine, Detroit Jazz Festival, Melbourne Jazz Festival in Australia and a three-week residency at the Black Cat in San Francisco. His most recent album,Gentle Giants, has received international acclaim and many reviews, including a four-star review from DownBeat Magazine. Cohen is among the most in-demand pianists as he continues to tour the globe with his blend of Jewish melodies, traditional jazz harmonies and impeccable rhythmic palette.