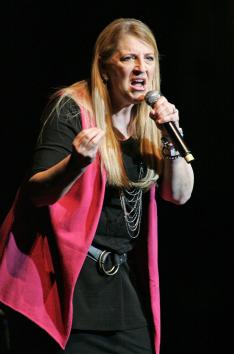 Who are the laziest people?
Blacks

Who are the smelliest people?
Arabs and Indians “they smell like curry”

Who takes it in the ass?
White women who date black men.

If you fall in any of these categories, you are the target of a mean girl. Lisa Lampanelli, Celebrity Apprentice contestants and one of the most successful female comic around insults any and all ethnic groups unapologetically. If you find yourself in her audience, like we did in 2010 in Miami Beach during her comedy routine, you better have the gut to stomach the dirt that she slings.

Stand up comedy is still a male dominated industry, but in this world there is only one woman who has the balls to stand up to them, and Lisa does with her ‘Jimmy Big Balls,’ that is. A name she gave her husband to fit her stand up routine.

The former journalist often poked fun at her husband and while performing in Miami Beach, he did not escape her. She spoke jokingly about the size of his scrotum and literally ripped him apart, embarrassingly.

Although the comedian has an aggressive, harsh, brash, and raunchy approach with her humor, in the end it is just for laughs.

Lisa returns to Miami Beach with new R-rated materials on November 9th. There is just no shame in this mean girl’s game.