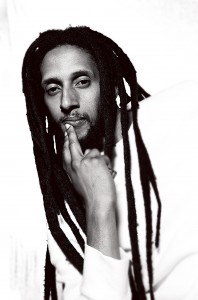 I was flushed with excitement when I received news that I would be interviewing the son of the Legendary Bob Marley, Julian Marley. With wails and manes like that of his father, Julian Marley has been performing roots rock reggae for most of his life. It is difficult to talk about Bob’s children without referring to the Legend himself. He created this beautiful music that inspires us, all over the world, Reggae Music. The blood runs intensely through the veins of his children, where they continue to spread love and unity through their music and encounters with others. Julian, the self-taught musician has grown into a man of his own, and has created his own identity, while keeping the legacy and memories of the true foundation. In his new album, Awake, he touches on the injustice within the society, and encourages everyone to break down the barriers and to be open and free.

Talking to Julian, I could not help but notice how IRIE he was. There was a sense of calmness about him which draws me back to an interview that was done many years ago with his dad, where Bob was extremely calm and irie throughout the interview. I managed to get a few secrets out in regards to what gives him the energy while on stage, how he spends his down time (playing football and music) and what truly inspires him.

The final stop of the Awake Tour, Julian Marley and the Uprising featuring Stephen Marley and Damian “Jr. Gong” Marley will be at the Arsht Center, Miami on November 22, 2009. The brothers will blaze the stage with soulful tracks from the album as well as roots-reggae, street-energy hip hop, bubbling dancehall, R&B and reggae combinations. Be prepared to be Jammin’ all night to the vibrant beats and vocals from Julian and his brothers.
One Love _Daedrian McNaughton

PGM: Welcome back to Miami, welcome home and congratulations on the success of your new album-Awake.

PGM: On your title track the lines, “For many years we have been lost in our tears, for many years the prophets have spoken and still can’t find no peace of mind, when will we wake?” Explain those lines to us and to what were you referring at that time?

JM: We were referring to life and freedom of mankind. The words our prophets have spoken, Marcus Garvey, Martin Luther King, so many great ones have spoken so many words of wisdom. From that time to this time, have I seen any great changes? A few things have gotten better, no longer any racial barrier but now everyone feels the pain. Awake is dealing with the system and freedom of the mind.

PGM: What was your inspiration for this new album and why have you decided to name it as such?

JM: God is our first inspiration, life in general and also knowing that my music is…I find myself writing a lot of social songs, my songs are geared for togetherness. So fi mi di inspiration is jus’ life (The inspiration is just life). The things we see everyday, good and bad. We have to find a way to translate it and put it in music. Yuh have songs like tings’ aint cool,…..everyday so much war, so much fighting, so much tings going on, tings aint cool no more, can’t be fooled no more. The wise men followed the guiding star and without guidance we will not go far. Even the rulers need guidance. Yeah…the whole world inna a state yuh know (The entire world is in a state).

PGM: Your brothers Damian Jr. Gong and Steven have joined you on this album, where are Kymani, Robbie, Rohan and Ziggy? They are not apart of this album, why is that?

JM: Well Robbie does not sing, neither does Rohan. When we work on the album, we wish everyone of our family is there. Sometimes everyone is doing their thing, its not every time you can get everyone in one place. So sometimes it goes like that. The last album, Ziggy played on…..and so did Rohan too. A so it go sometime eh nuh (That’s the way it goes at times).

PGM: What would you say is the main ingredient that kept you and your brothers together as a family and as the children of a Legend?

PGM: What is the message you would like to get to your fans through your songs?

JM: Unification for everyone. Freedom!!!!! Once we are free in our minds in our hearts in our spirit then we will love each other and be able to do other things. Until our minds are free we will be segregated, selfish …..Once the barrier is broken then things will be open….

PGM: Your final performance is set here in Miami at the Arsht Center, what influenced your decision in making Miami your final stop on the tour?

JM: Well this is where we are most times. So we are in Miami, we live in Miami also, it’s always good to seal it right at your home front. Yuh know wat a mean?

PGM: Do you believe you music has cut across all genres? Is it accepted throughout the world?

JM: Yeah.. We don’t really make one kind of music. It crosses all borders. We have fans all over the world, in Russia…Reggae music is our foundation music, but we love other music to yuh kno…like jazz, blues, pop, dancehall, funk everything as long as there is something that draws me into it. I have no barriers with music..I love all kind of music.

PGM: You are already celebrated as a Marley, the son of Bob Marley. How did you feel or what was your experience like when you performed on the world’s stage in Beijing, China during the 2008 Olympic Games alongside the world’s fastest man  Usain Bolt?

JM: It was a great experience supporting our Usain Bolt of Jamaica. It was great. A waan tell yuh, a didn’t even see him (I want you to know, I did not see him). Yeah mi neva get fi see him because the Olympics is such a big event that we had  3 different venues and everything was working simultaneously….yeah. We did 2 performance in 1 day. We performed…….It was a good celebration before the race and the final one as soon as the race was finished. We watched the race on a big screen in a different location. As soon as he won it was time for us to perform.

PGM: What do you do to keep the memories of your dad alive? Would he be proud of you today if he were alive?

JM:I would feel so. We keep his memory alive by breathing everyday. Even when you do not hear about us or you don’t see us his vibe is very live..yuh know wha’ a mean?

PGM: Have you accomplished what you’ve intended from the Awake Tour?

JM: Yes…We have accomplished a lot by coming out to the people and delivering the message live…yuh know what a mean….

PGM: How was the reception during your tour?

JM: Yeah mon wi getting a good reception. It was great…

PGM: You are constantly on the go…how do you manage to keep the energy going?

JM: Then that will be giving away all the secrets….steam fish and hard ground food like yam, potato, dasheen, bananas an’ dem ting deh an yuh steam fish and okro. (A Jamaican dish, favorite among locals)

PGM: Julian, thank you so much for talking with us. You, your brothers and the entire Marley family are true inspirations for us all. We celebrate the Bob Marley’s legacy everyday in our lives. We wish you success in all your endeavors. BLESSED

*****During a “Giving Thanks With The Marleys” initiative, The Ghetto Youths Foundations is asking attendees to bring non-perishable canned goods to the event. These donations will be given to CHARLEE (Children Have All Rights: Legal, Educational and Emotional) Homes for Children to help feed over 170 young adults who have aged out of foster care and provide food for families in need during the Thanksgiving holiday.  CHARLEE is a private not-for-profit social service agency created in 1983 in Miami-Dade County, caring for children ages 0-23 years old that have been placed in foster care due to abuse, abandonment and/or neglect. What started as a small group home program, serving 30 children, has grown to become one of the largest foster care providers in Miami Dade County, serving approximately 1,400 children each year.