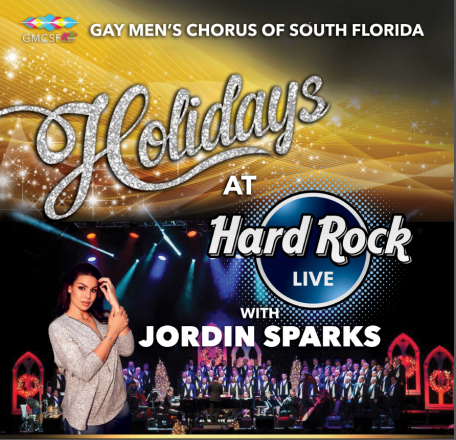 Tickets are on sale now and cost $80, $60, $50 and $40. VIP packages are available for purchase. All seats are reserved and available at all Ticketmaster outlets online at www.myhrl.com and www.ticketmaster.com. Doors open one hour prior to show time. Additional fees may apply.

The 130-member Gay Men’s Chorus of South Florida is the largest gay men’s chorus in the southeastern U.S. and is beginning its 10th season.  The Chorus has become one of the region’s largest and most successful community-based choruses celebrated for outstanding musicianship, creative programming, and community outreach. Each year, The Chorus reaches over 19,000 audience members with its messages of love and inclusion.

Sparks received worldwide attention as the winner of American Idol’s season six.  Sparks was just 17 years old when she won the coveted title in one of the highest rated seasons of the series.  She has garnered two BET Awards, one American Music Award, one People’s Choice Award and has been nominated for two VMA Awards and a Grammy.

Her self-titled debut album went platinum, selling more than two million copies worldwide. The first three singles of “Jordin Sparks” went top five, and the album’s second single “No Air” sold four million digital downloads. “No Air” has the distinction of being the third highest selling single by any American Idol contestant and is listed at No. 27 on Billboard’s “Top 40 Biggest Duets of All Time.” Sparks’ second release, “Battlefield,” debuted on the Billboard Album chart at No. 7. Cumulatively, Sparks’ popular singles have sold more than 10 million digital tracks in the US.

Sparks’ impressive vocal talent has made her the go-to anthem singer and she has performed at many high-profile sporting events. Her powerhouse voice has been featured in films such as Disney’s “African Cats,” “Beauty and the Beast” and “Best Man Holiday.”  She made her film debut playing the lead role in the SONY Pictures film, “Sparkle,” opposite Whitney Houston.  Other film credits include “The Inevitable Defeat of Mister and Pete,” “Left Behind,” “The Grace of Jake,” Show Dogs” and “God Bless The Broken Road.”

Sparks’ stage roles include two Broadway productions.  She is currently starring as the lead Jenna in the Sara Bareilles musical, Waitress, through Nov. 24. Previously, she made her Broadway debut in Lin-Manuel Miranda’s smash production “In the Heights.” Sparks has also appeared in numerous television programs and specials both as an actress and performer, including Nickelodeon’s “Big Time Rush,” “CSI Crime Scene Investigation,” Lifetime movie “Dear Secret Santa,” and performances on VH1 Divas, Macy’s Thanksgiving Parade and The Billboard Music Awards.  She is also a daytime talk show staple having co-hosted numerous programs including TODAY on NBC, ABC’s The View, CBS’ The Talk, and The Dish on Dr. Oz (syndicated).