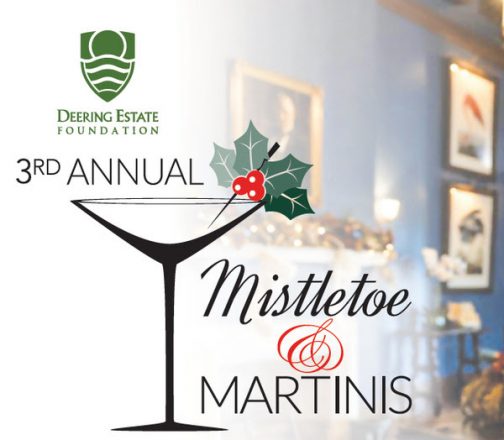 The 3rd Annual Mistletoe & Martinis event at the Deering Estate will recreate the glory of Christmas past replete with the sights, sounds, aromas and decorations from that era. Guests will enjoy festive music, flavorful samplings of martinis, and lavish hors d’oeuvres and desserts from some of South Florida’s finest restaurants and caterers. The event takes place on Friday, December 13 at 7:30 pm at the Deering Estate, 16701 SW 72 Avenue, Palmetto Bay. All proceeds benefit The Deering Estate Foundation, raising awareness and supporting programming for community, conservation and culture.

Mistletoe & Martinis brings together friends, neighbors and donors for a special evening of holiday cheer, celebration and giving.  Guests will mix and mingle while strolling through the historic homes and magnificent grounds, which will be transformed into a wondrous Festival of Trees gloriously lit up and fully adorned for the holidays.

The holiday décor will be designed by some of South Florida’s top interior designers, led by Alfredo Brito, the Deering Estate’s Designer in Residence. Based in Miami, Brito is an award-winning designer whose talents have been recognized in various publications, including Architectural Digest, Casa & Estilo and Florida Design. In addition to Brito, the design team includes Taylor Abess, Miguel Garcia, Josh Humphrey, Fanny Mesa, Denise Pernarella and Frank Pompey.

In keeping with the historic significance of the Deering Estate, Brito will recreate the glory of Christmas as it was celebrated in the 1920s, incorporating a blending of Art Deco with Egyptian themes. “I chose that decade, as it was in 1922 that the Library was built on the estate, and that was also the year in which the tomb of Tutankhamen was opened in Egypt, resulting in a period that showcased Egyptian-themed décor, fashion and colors,” said Brito.

Throughout the historic homes on the Deering Estate, guests will travel back in time to an era where homes were embellished with Egyptian imagery, peacock feathers and historical themes depicted on oversized urns. In the Library, the Christmas tree will be adorned with hand-blown glass ornaments depicting Tutankhamen, Nefertiti, cats and other representations of the era. Several rooms have been renovated to replicate the rich, embellished layers described in the Deering’s 1920’s inventories, making for a luxurious Old World elegance not seen since the family’s early days at Cutler.

For a complete list of holiday happenings and events at the Deering Estate, including the Festival of Trees and Story Time with Santa go to deeringestate.org/holiday-season/.