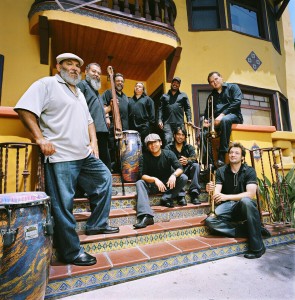 “JAZZ ROOTS: DESCARGA! promises to be an unforgettable evening of awe-inspiring performances and rhythmically contagious music for South Florida concert-goers,” said M. John Richard, president and CEO of the Adrienne Arsht Center. “This program’s extraordinary lineup further demonstrates our commitment to present and foster the work of local talent such as Tiempo Libre, as we celebrate Miami’s rich cultural diversity and bring our community together for an evening guaranteed to be a Latin jazz explosion.”

Grammy Award winner, master conga player, salsa singer and leader of one of the most popular Latin jazz groups in the world today, Poncho Sanchez is regarded as the elder statesman of Latin jazz and respected as one of the top percussionists of our time. At a young age, he was inspired by the playing of Cuban great Mongo Santamaria, as well as Latin jazz patriarch Tito Puente and bebop legend Charlie Parker. Early in his career Sanchez landed a permanent spot as conguero in Cal Tjader’s Latin jazz group and played with the vibraphonist for many years until Tjader’s death in 1982. Shortly thereafter, he formed his own band and has since performed around the globe for the past 40 years with the most illustrious names in music, including Hugh Masekela, Mongo Santamaria, and iconic funk band, Tower of Power.

Three-time Grammy-nominated Tiempo Libre is one of the hottest young Cuban groups on the scene today. Equally at home in concert halls, jazz clubs, and dance venues, the members of the Miami-based group are true modern heirs to the rich tradition of the music of their native Cuba. All of the band members were classically trained at La ENA, Cuba’s premier conservatory. Today, as the first all-Cuban timba group in the U.S., Tiempo Libre is a hit in the U.S. and abroad. Their goal is to be musical ambassadors for their native Cuba, and they have introduced new audiences to timba and Cuban music through concerts at prestigious venues including the Hollywood Bowl, New York’s Jazz at Lincoln Center, and Chicago’s Ravinia Festival, as well as through performances on national television shows including The Tonight Show and Dancing with the Stars.

Recently signed to Sony Music, the group released its latest album Bach in Havana – a fusion of Bach with Afro-Cuban rhythms. The CD was nominated for a Grammy Award (the group’s third nomination) and is enjoying critical acclaim.  Shortly after being named “Best Latin Band 2008” by the Miami New Times, Tiempo Libre brought a true Cuban experience to its American hometown of Miami, with the interactive musical production Miami Libre, which premiered at The Adrienne Arsht Center. The musical, based on the band’s collective immigrant experience, is told through English and Spanish narrative, sizzling music and explosive dance.

JAZZ ROOTS also features an in-depth educational partnership with Miami-Dade County Public Schools which will bring more than 900 music students to the Center for a unique behind-the-scenes experience, including a pre-concert sound check and a Q&A session with featured artists followed by a workshop with a local jazz expert that will highlight the music, the artistic process and the practical skills needed for a career in the arts. In addition, the Center has developed a curriculum which will be distributed to 800 music, English and social studies teachers throughout the MDCPS school system, potentially serving 24,000 children.

Heralded by Quincy Jones as “the most important new concert and educational jazz series in America!,” JAZZ ROOTS has the unique distinction of being the only major jazz series in America that has sold-out every one of its concerts since inception. Remaining concerts in the third consecutive season of the JAZZ ROOTS series include: AN EVENING WITH KEITH JARRETT (January 21); CELEBRATING MILES (February 25); THREE GENERATIONS OF DIVAS (March 18); and GUITAR VIRTUOSOS (April 1).  Since the inception of the series, more than 20,000 South Floridians have attended JAZZ ROOTS concerts at the Adrienne Arsht Center.