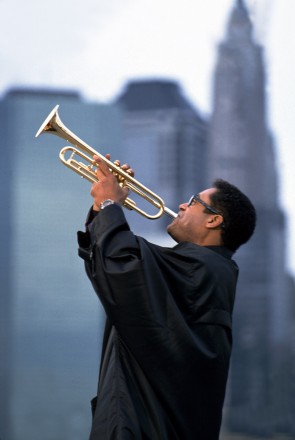 The Adrienne Arsht Center for the Performing Arts of Miami-Dade County and Larry Rosen, together with presenting sponsor TotalBank, present the next installment of JAZZ ROOTS – A Larry Rosen Jazz Series: CUBOP – CELEBRATING DIZ AND CHANO on March 22, 2013 in the John S. and James L. Knight Concert Hall. Internationally celebrated Cuban multi-instrumentalist and NEA Jazz Master PAQUITO D’RIVERA will headline the concert, joined by JON FADDIS – one of the world’s greatest trumpeters and a protégé of Dizzy Gillespie. Also on the bill are Latin percussion legend GIOVANNI HIDALGO, vibraphone master DAVE SAMUELS and Miami’s superb FIU JAZZ BIG BAND. The concert is the fifth in a series of six concerts during the 2012-2013 JAZZ ROOTS Fifth Anniversary Season.

The groundbreaking body of work that resulted from the musical collaboration between bebop innovator Dizzy Gillespie — who became “the godfather of Latin jazz in the U.S.” — and the great Cuban conguero Chano Pozo will be showcased on this concert. This newly formed Cubop sound fused African-based rhythms with post-modernist bebop and produced some of the most enduring Afro-Cuban jazz standards, such as the hit songs “Manteca,” “Tin Tin Deo,” and “Cubana Be, Cubana Bop.”

A six-member dance ensemble, comprised of local students from the Arsht Center’s AileyCamp Miami 2012, will open the show with a thrilling dance display set to the mesmerizing rhythms of African drumming to emphasize the connection between the drums that came from Africa to Cuba and their role in becoming part of the DNA of the music of the Americas.

“Our Jazz Roots: Cubop – Celebrating Diz and Chano concert promises to be an unforgettable evening of contagious rhythms,” said John Richard, president and CEO of the Adrienne Arsht Center. “The program will highlight the music created by these two legendary artists who pushed the boundaries and brought Afro-Cuban jazz into the jazz mainstream. The extraordinary lineup of jazz artists further demonstrates our commitment to celebrating Miami’s rich cultural diversity as we bring our community together for an evening guaranteed to be a spectacular night of Latin jazz.”

Cuban-born clarinetist, saxophonist, composer, and child prodigy PAQUITO D’RIVERA is an artist who defies categorization. The winner of eleven Grammy Awards, he is celebrated both for his contributions to Latin jazz and his achievements as a classical composer. He was a founding member of the United Nations Orchestra, an ensemble organized by Dizzy Gillespie to showcase the fusion of Latin and Caribbean influences with jazz. In 1991, D’RIVERA received a Lifetime Achievement Award from Carnegie Hall for his contributions to Latin music, and was later awarded the NEA Jazz Master Award and the National Medal of the Arts, as well as the Kennedy Center’s Living Jazz Legend Award. The National Hispanic Academy of Media Arts and Sciences also paid tribute to D’RIVERA with their Annual Achievement in Music Award for his “outstanding body of work” along with Dizzy Gillespie and Gato Barbieri.

Internationally renowned trumpeter, conductor, and composer JON FADDIS is the consummate musician. He earned accolades from his mentor, Dizzy Gillespie, who declared of FADDIS, “He’s the best ever, including me!” In his more than 30-year career, he has performed and/or recorded with Gil Evans, Charles Mingus, Dizzy Gillespie, Ray Brown, and Joe Henderson, among many others. FADDIS has served as music director and conductor for leading big band orchestras such as the Grammy Award-winning United Nations Orchestra; the Dizzy Gillespie 70th Birthday Big Band; the Carnegie Hall Jazz Band, and its successor, the JON FADDIS Jazz Orchestra of New York, in addition to performing regular engagements across the globe as leader of his own ensemble.

Grammy Award-winning percussionist GIOVANNI HIDALGO is an unrivaled performer whose skill and technique are admired by percussionists around the world. He was born in Puerto Rico and came to prominence after working with the Cuban group Batacumbele, during which time he began a life-long friendship with Cuban percussion master Changuito. The group’s debut album became a cult favorite and launched HIDALGO into instant prominence. Shortly thereafter, while performing with Eddie Palmieri in New York, he met Dizzy Gillespie who recruited him to join his United Nations Orchestra. HIDALGO has toured extensively with Tito Puente, and performed and/or recorded with the likes of Dave Valentin, PAQUITO D’RIVERA, Carlos Santana and Paul Simon.

Latin Grammy Award winner DAVE SAMUELS has established himself as one of the leading vibraphonists of his generation. He is recognized for his fresh new sound and creative approach to both the vibraphone and marimba. SAMUELS has demonstrated his versatility and gained worldwide recognition by performing and recording with a broad scope of artists ranging from Gerry Mulligan, Oscar Peterson, Chet Baker, and Stan Getz, to Pat Metheny, the Yellowjackets, Frank Zappa, and Spyro Gyra. For more than a decade, SAMUELS has been performing and recording with his group The Caribbean Jazz Project — one of the most inventive Latin Jazz ensembles of this or any era.

The FIU JAZZ BIG BAND, under the direction of Jim Hacker, has become internationally recognized as one of the premier college jazz ensembles in the world. Invitations to the International Association for Jazz Education Convention, the Mid-West Band & Orchestra Clinic, the Wigan Jazz Festival, the North Sea Jazz Festival, the Quito Jazz Festival, and the Maceo Jazz Festival have taken this world-class group of graduate & undergraduate students beyond the realm of the ‘typical’ college band. The members of the FIU Jazz Big Band are full-time graduate and undergraduate students, many of whom are currently working professionals with local, national, and international artists.

JAZZ ROOTS’ in-depth educational partnership with Miami-Dade County Public Schools has brought approximately 5,000 high school music students to the Center for a complimentary and unique behind-the-scenes experience including: a pre-concert sound check; a Q&A session with featured artists followed by a workshop with a local jazz expert that will highlight the music, the artistic process and the practical skills needed for a career in the arts; and free entry to the evening’s performance. The Jazz Roots education program is made possible in part by a grant from The ASCAP Foundation Louis Armstrong Fund and individual contributions from members of the Jazz Roots Encore Circle.