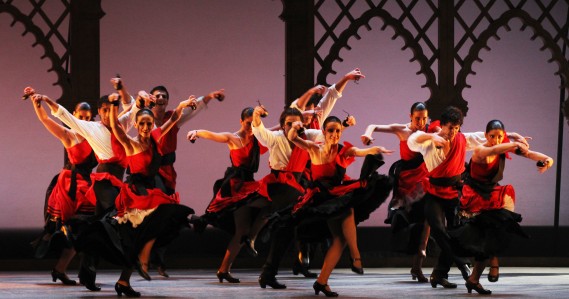 Coinciding with the 500th Anniversary of Spanish explorer Ponce de Leon’s arrival in Florida, Flamenco Festival Miami returns to the Adrienne Arsht Center for the Performing Arts of Miami-Dade County for a sixth season of world-class flamenco dance and music with Spain’s massively popular Ballet Flamenco de Andalucía, coming to Miami for the first time, direct from the land where flamenco was born!

“Flamenco Festival has become a staple of the Miami arts scene since it premiered in 2008 and, with the 2013 debut of the famed Ballet Flamenco de Andalucía, we continue to deliver the highest level of flamenco artistry in the world to our audiences each season,” said John Richard, President and CEO. “TotalBank shares the community’s passion for world-class flamenco and we are pleased to announce their expanded support to include this Signature Series in addition to our incredible Jazz Roots series.”

Metáfora is a colorful tribute to the bolero origins of flamenco and a thrilling look at the genre’s modern-day flirtations with contemporary movements (bulerias, flamenco waltzes, veriales, and zambras, to name a few). Dressed in full flamenco regalia, the 19-member company, comprised of the best flamenco artists in the world, combine thrilling ensemble numbers with beautiful duets and solos,all set to live guitar, vocals and percussion.

The Miami performance also includes stunning performances from Flamenco’s most important and daring young stars: the sensuous Pastora Galván, equally breathtaking in classic and modern flamenco, and Rocío Molina, the fiery dancer who has “become one of the finest soloists in the world today” (The New York Times).

MetáforA is the first project created for Ballet Flamenco de Andalucía by star dancer and Artistic Director Ruben Olmo, which he also directs and in which he performs. The artistic career of Rubén Olmo began in his hometown of Seville, where he studied at the Conservatory of Dance of Seville and trained with greats Manolo Marín, Carmen Montiel and José Galván. Prior to joining Ballet Flamenco de Andalucía as Artistic Director in 2011, Olmo performed with the company under the direction of María Pagés, with Eva Yerbabuena and as principal dancer with Ballet Nacional de España. His original choreography for “Tranquilo Alboroto” earned him the “Giraldillo” award for the best choreography, one of the top recognitions of flamenco excellence.

Founded in 1994, Ballet Flamenco de Andalucía has toured the world (United States, Italy, Hungary, Switzerland, Japan) and received many of the top artistic honors, including Spain’s top dance honor, The National Choreography Prize, and the Max Prize. The company has been an inexhaustible source of talent from which some current outstanding dancers originated, including Israel Galván, Isabel Bayón, Rafael Campallo, Belén Maya, Rafaela Carrasco, Fernando Romero, Mercedes Ruiz and María José Franco, among others.