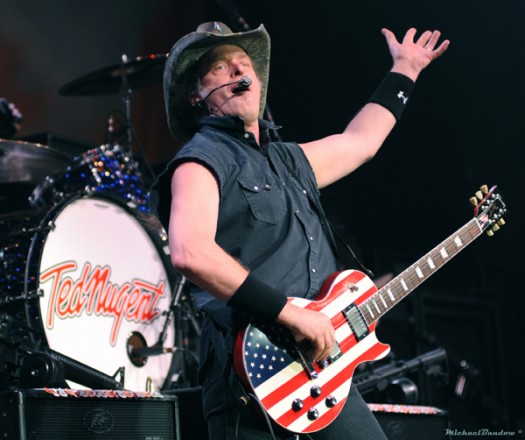 Patriotic to the core, American musician, Ted Nugent is never without controversy, political angst and passion for the things he holds on tight to. The Motor City Madman as he is often referred to is passionate about his guitar, family, Rock n Roll, hunting, freedom and most importantly the second amendment, ‘the right to bear arms‘.

In 2010, on his Trample the Weak, Huddle the Dead Tour, Gary and I were invited to cover Ted Nugent at the Revolution Live, in Florida. Before then, I knew nothing of the musician, and was impressed with what seemed to be a genuine love and devotion for his art. He gave 100 percent of himself, and said freely whatever he wanted to say. In the spirit of the July 4th holiday, Uncle Ted started the concert with a rocking rendition of Stranglehold (Star Spangle Banner) which was brilliantly played with his red, blue and white guitar. He delved deeper into his materials feeding directly from the energy from the crowd, who soaked up every bit of his screeching and screaming guitar solos, and some of his earlier anthems like Clusterfuck, Cat Scratch Fever, Wang Dan Sweet Poontang and others.

The evil politicians, referring to the Obama administration, are infringing on his rights to hold his guns and knives sacred. “Halt those daring to infringe ….so we stand and fight…” he shouted.

Unlike most Americans, Ted is a political warhead and will voice his opinions, freely and unsolicited. He will continue his political tirade, and vent his disdain for the Democratic Party and President Obama. Although I was impressed with his skills as a guitar player and a musician, I was turned off and disappointed with the offensive language and rhetoric used towards the President of the United States of America. It was downright disrespectful.

Undoubtedly, he knows how to energize and entertain his fans. And in his most recent concerts his message and anti-Obama rhetoric were stronger.

“I wanna get rid of the dirty cocksuckers in the White House….If there is any justice, Barack Obama will end up being a communal worker in Cuba,” he shouted. And the fans reveled in it.

Comments like these have landed Nuge in hot water with members of the Democratic Party calling for investigative action against him. According to TalkingPointsMemo.com, Nuge made the following offensive comment at an NRA convention. He said the President was a criminal, “a vile, evil American hating administration wiping its ass with the Constitution. If Obama becomes the President in November, again, I will either be dead or in jail by this time next year.”

Ted’s over the top radical behavior and extreme personality have become main stage and has been embraced by those who follow him. And for him, this is the only way to live. If you are a die-hard fan, you would agree that Nuge is fueling his art through politics. However, if you are an outsider, it is poison, and sounds like the preaching of intolerance. Comments like, “keep a gun in your hand boy…the only thing missing in this world, is more dead fucking assholes,” give life to his act.

Even though the backdrop of his set was a raging cartoon figure tooting two machine guns, and a machine gun mounted next to his drum kit, on stage his real gun was his red, white and blue striped guitar. This was his musical pistol which he unloaded like a semi-automatic with unfiltered emotions. There is no denying that he rocks an explosive guitar session.

Whether this is a marketing ploy or art, this 70’s rocker has managed to keep himself in the spotlight with his constant political rants and heated discussions over his right to bear arms.

Apparently his fans do crave the outspokenness of his fusion of music and politics, poli-music with a bit of storytelling about his hunting adventures. The unapologetic, gun swirling rocker had no reservations with his running commentaries on politics and America, in between songs. At the end of each commentary, he would challenge the audience by asking, “Any questions?’
The Motor City Madman and guitar god brought his intense and ferocious musical performance and performed well over two (2) hours with a screaming encore. He returned on stage donned in a decorated Indian chief’s headdress, and ended the concert with Great White Buffalo.

Although he hates the policies and control of the Obama administration, he admits America is far more prominent, and a better place to live than anywhere in the world.

When: December 2, 4:00pm to 5:00pm VICE x Art Basel Miami Beach presents Kimberly Drew in conversation with Jerome Lamaar, Shannon Stokes and Talia Bella When we look back to…