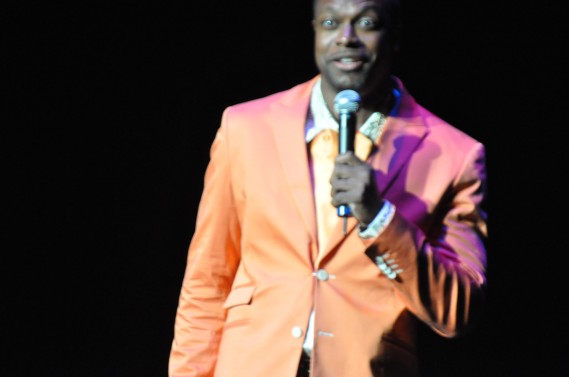 Clad in bright orange iridescent attire, Chris Tucker appeared on stage at the Fillmore in Miami Beach to a welcoming crowd. Appearing dapper, clean and a little meatier than we are used to seeing, he relished the applause and cheers from the audience. Like a lost sheep, his gaze out in the audience echoed, “Guess Who Is Back?” And he soaked up the love.

The comedian who has transcended into a successful movie career, had huge successes from the highly grossed Rush Hour movie, co-starring Jackie Chang; after which Tucker exited the spotlight. After reports of his alleged tax debt to Uncle Sam, he resurfaced to set the record straight and make comedy out of his precarious situation. He told the audience that telling the truth better help others to relate to him. He even poked fun at Wesley Snipes who is currently serving time for tax evasion. “That‘s the last time I let Wesley Snipes help me out with my taxes,” Tucker said.

Tuckers absence seemed to have some benefit as his Guess Who Is Back routine, has enough materials and juice for a double tour. That would be enough to help him pay a portion of his debt. He did not shy away from making humor of his own misfortune, and he spoke openly and candidly about the situation. He also touched on areas of his dysfunctional childhood, family life, The Obama’s, church, IRS, movie flashback with stories from the blockbuster, Rush Hour movie and his relationship with the late, Michael Jackson. Also throughout the entire show he continued with his usual antics and comical facial expressions which were hilarious.

Chris Tucker who had a special relationship with the king of pop, the late, Michael Jackson, was deeply saddened by his death. In recognition of their friendship and as a tribute, the comedian puts on a singing and dance session channeling, Jackson. He sang, Human Nature. It was a light moment, but we recommend he sticks to comedy and movies.

With his high energy comedic style, Tucker has returned to his roots. He has grown up, now more mature than the unpredictable and wickedly funny Tucker we are used to from Def Comedy Jam and the cult hit film, Friday.

Unlike most, Chris has something to fall back on. He has matured, and at his last comedy routine, he was able to pick up where he left off. And the bottom line is, Chris Tucker is funny, and he always gives a good show. Welcome back, Chris Tucker.