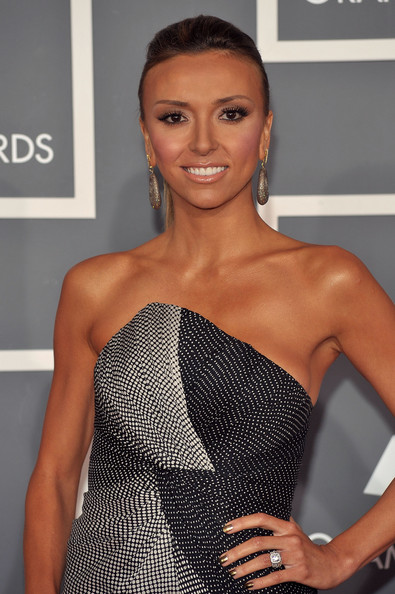 Premier Guide Media caught up with Giuliana Rancic, co-host of E! News to dish about her hosting duties on the 2011 Miss USA Pageant. The pageant will air Sunday, June 19, live from the Planet Hollywood Resort and Casino in Las Vegas beginning at 9 pm Eastern Time on NBC.

How did you get involved with the Miss USA Pageant?

Giuliana Rancic: They called and I was thrilled. It was always something I wanted to do. We all have like strange goals or different things we want that like other people sometimes think are quirky or funny. And I don’t know why. Like people you talk to what did you always want to do? I’m like well ultimately I’d like to maybe host a daytime talk show, oh, and host Miss USA. Like I’ve always thought it would be so cool to host Miss USA probably because I grew up watching it every year and obsessing over it. So I was thrilled when they asked.

Do you usually watch the pageant every year?

Giuliana Rancic: I do, since I was a kid.

What do you think of pageants in general?

Giuliana Rancic: It has a Cinderella factor to it that girls and women love. I know that when I was a little girl, and I moved to America when I was about 7 or 8 years old, and I used to watch Miss USA every year. And I just thought wow. These girls are so glamorous and so beautiful. And at the end of the night they got a tiara. And then they went on the whole year and they got to do cool things around the country. And it was just beautiful wanting to be Cinderella and like this fairy tale. And kind of the same reason we all tuned into watch Kate Middleton get married; I mean I think there is something just really wonderful about a young girl realizing her dreams. It’s just a really like sexy, beautiful, cool show to watch.

What will you bring as host?

So what are you looking forward to as hosts?

Giuliana Rancic: I’m just excited to be there too just to do a big, live show like this. And millions and millions of people watch this show. And there is a lot of excitement behind it. And being with Andy is going to be fun. Some of these people like these pageants are fun. And if you notice girls with personality tend to win these. Like you’ve got to have like a cool, fun persona. And I think that’s kind of our approach into hosting it. We’re not going to like be really like stiff and boring. We’re going to just have fun and kind of go with where the show goes. And if we want to make a comment about something that happened that everyone is thinking about but no one is saying, we’re going to make it. And so I think that’s why they brought Andy and I in, because we can have sharp tongues sometimes and we roll with it. I’m looking forward to kind of the fact that it is not safe. It’s live and anything can happen.

Are you looking forward to the rehearsal for the pageant?

Giuliana Rancic: Yes. Our parts will be initially scripted but Andy and I will go through and change up whatever we need to to make it. Put everything in our words and make it feel very natural and fun. Like we want people tuning in to feel like anything could happen at any time. And with Andy of course from Watch What Happens: Live anything can happen. And also with all the red carpets I do with the Oscars, the Globes, you never know what celebrity might give you the greatest interview or might give you the worst interview and say something totally inappropriate. I mean you don’t ever know what’s going to happen at these shows. So we want to be sure that we totally capture all the crazy moments. And we’ll be right there doing it.

What look are you going for-for the pageant?

Giuliana Rancic: A la Beyoncé, Cher. I’m doing three wardrobe changes which is very exciting. And it means we have to move very quickly. But to be honest, my first fitting is Thursday.  I have an amazing stylist that is coming in for the show. She does Eva Longoria and lots of great people in Hollywood. So who knows what what tricks she has up her sleeve. But I know we’ve called in from very big designers. So I am excited to see what we have. What I’ve seen people do in the past on that show that, women who have hosted it, they tend to look kind of similar to the girls in just like a more mature fashion. And I definitely don’t want to do that. I think I want to let the girls shine. Let them do their own thing. And I want to just focus more on the fashion of it; maybe do something daring. I might play with a menswear look. I think that would be fun. That would be a cool contrast for such like a feminine event. So high fashion and just very different and maybe with some irony in it.

Giuliana Rancic: If Chris Jenner competed in Miss USA, she would win hands down. That woman is not only gorgeous and knows how to work it, but she has such confidence. And she is so smart. That’s the thing about Chris Jenner. She is the savviest woman I have ever met.

Will you spend any time with the contestants?

Giuliana Rancic: We’ll spend some time with them. We’re doing like long rehearsals. We just got schedules. The funny thing is a lot of these girls, at least in the past pageants, a lot of them want to be broadcasters and hosts. So I’m sure we’ll be dishing out advice and helping some of these girls out. It’s good that we are not judges, because we can have much more interaction with them.

What do you think of Kelly Osbourne as the commentator?

Giuliana Rancic: Kelly Osbourne and I had a two hour conversation the other day about work and everything. I was cracking up on the phone. Like she didn’t know but I was just like pointing the phone away from my face because she is a straight shooter. Like she does not hold back, and I think that’s how she is on Fashion Police. Kelly doesn’t feel the need to be loud or yell things. But what she says is like when you look at her you can see she does this little tilt and likes squints her eyes like when she is looking at something. And she’ll just tell you what comes out of her mouth is so raw and real. And I think that’s going to be really cool about Kelly. And she won’t hold back. Like Kelly is very uncensored especially on live television. So I think it’s going to be very interesting. I can’t guarantee what she’ll say that night, because she is unpredictable. But she will definitely bring a very raw and strong opinion to the pageant that we have never seen before.

What was it like for you meeting Donald Trump?

Giuliana Rancic: My husband was the first apprentice. Donald hired him. And so if it wasn’t for Donald I would Mrs. Kwame Jackson. So I owe Donald my marriage and my future children. I owe him everything. So I have met Donald several times throughout the years. And what I love most about him is he is such a fan of pop culture. Like he knows everything going on in entertainment news and so does Melania. And I just think it is hilarious. So I’m a big fan. And I’m very excited that he asked me to do this with Andy.