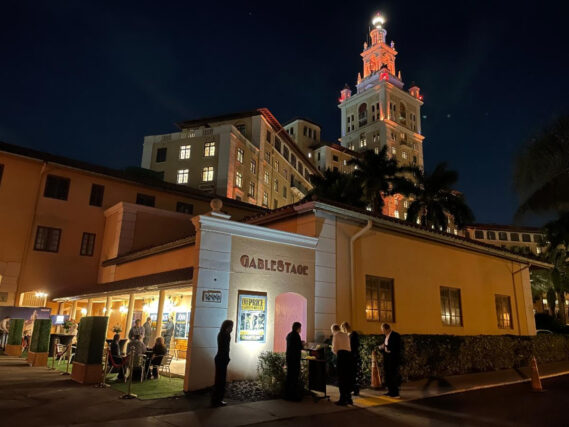 GableStage, the popular Coral Gables based theatre company that has made its home in the Biltmore Hotel for over 24 years, proudly announces its 2022-23 season. Five new productions, which illuminate the company’s mission of “confronting today’s issues and ideas” will account for 130 performances from October – July.
“We are thrilled to announce our 24th season, filled with regional premieres, off-Broadway hits, powerful dramas and a fabulously funny new comedy,” said Bari Newport, GableStage producing artistic director. “While the upcoming season is full of variety, the selections illuminate our mission of confronting today’s issues and ideas in unique and wonderful ways.”
The season begins with internationally renowned playwright Simon Stephens’ (The Curious Incident of the Dog in the Night-time) sharply original Heisenberg (October 28 – November 2022). An electric encounter between two strangers thrusts them into a fascinating and life-changing game. South Florida’s own Margery Lowe stars with Colin McPhillamy (Broadway’s Hangmen).
“A soaring, suspenseful, thrilling play!” — The New York Times
Risking everything to stand up for social justice, We Will Not Be Silent(January 6 – 29, 2023) is the true story of Sophie Scholl, a 17year-old German student who led a major act of civil disobedience against Hitler and his fascist regime. Written by playwright/actor, David Meyers’, We Will Not Be Silent examines the role of ordinary people in extraordinary times.
“….an intelligent and profoundly moving work of theatre.”— The ArtsFuse Boston
Lucas Hnath’s A Doll’s House, Part 2 (February 24 – March 19, 2023) is the bitingly funny sequel to Ibsen’s revolutionary masterpiece. Through a series of bristling stand-offs, we discover that a slamming door isn’t just an end, but also the chance for a new beginning. Starring Rachel Burttram, Brendan Powers and Elizabeth Dimon.
“A Doll’s House, Part 2 delivers explosive laughs while also posing thoughtful questions about marriage, gender inequality and human rights.” — Hollywood Reporter
As Hurricane Andrew threatens Miami, a mother and daughter ready themselves for the storm, but Abuela takes shelter in a world of memory, music, and magic. A powerful tale of family and forgiveness, El Huracán (April 14 – May 14, 2023), written by Miami native and recent Academy Award winner Charise Castro Smith (Disney’s Encanto), reveals what can be rebuilt in the aftermath of life’s most devastating tempests and what can never be replaced. A Florida Premiere, inspired by Shakespeare’s The Tempest.
“… magical realism that touches on the domestic in drama-queen like ways….”
The Houston Chronicle.
A sparkling comedy of good intentions and bad manners rounds out the season. In Karen Zacarias’ Native Gardens (June 9 – July 1, 2023) cultures and gardens clash, turning well-intentioned neighbors into feuding enemies. An impending barbeque and a delicate disagreement over a long-standing fence line soon spirals into an all-out border dispute, exposing both couples’ notions of race, taste, class and privilege.
“… the best stage comedy of the summer.” — Minneapolis Star Tribune
Season subscriptions range from $180 – $360. In addition to a host of benefits including free-of-charge ticket exchanges and discounts on additional purchases, subscribers always receive the best seats at the best prices, with a savings of up to 35%. To learn more visit gablestage.org or call (305) 445-1119.
Single tickets go on sale August 18, 2022.
Beyond the work being done on the stage, GableStage will continue to offer pre-show conversations with producing artistic director Bari Newport or other special guests, 20 minutes before each performance (subject to availability). Additionally, the company will continue to offer post-show chat-backs with cast and crew immediately following the first Sunday matinee performance. Opening nights will continue to include a pre-show cocktail reception starting at 7pm.
New to GableStage in 22/23 is an evolving partnership with Katie Christie and Voices United. Founded in 1989 as Peace Child Miami, Voices United is designed to promote cross-cultural understanding through the arts while nourishing and connecting warriors of change locally, nationally and around the world. GableStage seeks to deepen our work with the community, by offering meaningful, inclusive and inspirational programming throughout the season.
Voices United will spearhead the reinstatement of GableStage’s popular student matinee program. High Schools will have the opportunity to attend one of four matinees for We Will Not Be Silent and El Huracan. School matinees will occur at 10:30am on the following Fridays: January 20 and January 27; April 21 and April 28. Please contact education@gablestage.orgfor more information.
GableStage will continue producing its flagship Shakespeare in the Schools Tour program, which performs 40 performances at 17 Miami-Dade schools each season. Shakespeare’s Merry Wives of Windsor, will be the school tour in 22/23.
GableStage’s current 21/22 Season continues through mid-September:
See you at the theatre!