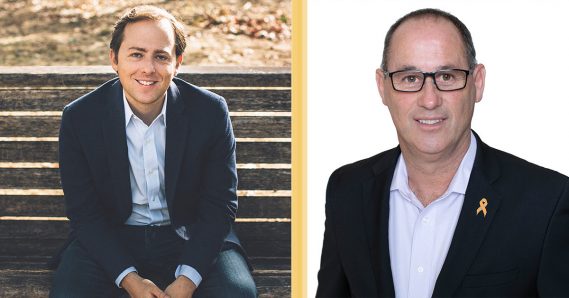 Thursday, June 18, 7pm
LIVE on Crowdcast
A *Virtual* Evening with
DAVID LITT & FRED GUTTENBERG
discussing
Democracy in One Book or Less: How It Works, Why It Doesn’t, and Why Fixing It Is Easier Than You Think
(ECCO, $28.99)
“Country got you down? . . . Former Obama speechwriter David Litt is here to help. Though Litt’s fun and funny treatise on what makes this nation, what’s wrong with it, and how we can fix it, was written before we became a country of people ordering curbside pickup from murder hornets, it’s remarkably prescient and applicable. It’s rare to feel good about the way things are going, but Litt’s book will get you there.”– Elle, “23 Books That Will Put You in a Good Mood, Guaranteed”
David Litt is the New York Times best-selling author of Thanks, Obama: My Hopey Changey White House Years. From 2011-2016, David wrote speeches for President Obama, and was described as “the comic muse for the president” for his work on the White House Correspondents’ Dinner. Since leaving the White House, he served as the head writer and producer for Funny Or Die’s office in Washington, with a focus on improving youth turnout in the 2018 election, and is currently developing a sitcom based on his life in D.C.  He frequently appears on CNN and MSNBC to discuss current events.
REGISTER TO ATTEND