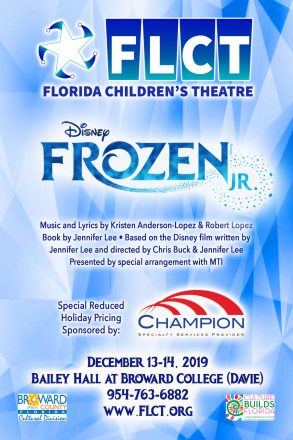 A cold front is coming to South Florida this winter, with Florida Children’s Theatre’s (FLCT) upcoming production of Frozen Jr., based on the enchanting modern Disney classic film.  Adapted in 2018 as a Broadway musical, this newly released theatrical stage version brings Elsa, Anna, and the magical land of Arendelle to life, and features all of the memorable songs from the animated film, plus new songs written exclusively for the Broadway production.

Champion Specialty Services, a Fort Lauderdale based business and a leading specialty services provider for the heavy construction, road & bridge, and industrial markets, has come on board as the Production Sponsor, to bring this magical show to South Florida families at a significantly reduced cost.

Champion’s President, Carlos Hernandez, is an enthusiastic supporter of the arts, inspired by his children who are both musical theatre performers.  “It’s an honor for Champion to sponsor FLCT’s performances,” said Hernandez. “We understand the impact of the arts in the community and we wanted to be a part of bringing this incredible production to South Florida.”

Champion’s generous contribution will offset the ticket price for this show as a holiday gift to the South Florida community, so advance tickets will cost only $15 instead of the usual $25. Frozen Jr. will be presented at Bailey Hall on the Broward College Central Campus December 13 and 14, 2019. FLCT plans to permanently relocate operations to that campus in early 2020, and this underwriting opportunity by Champion Specialty Services will allow families from Plantation, Davie, Weston, Pembroke Pines, Cooper City, West Fort Lauderdale and other local communities to learn more about FLCT and experience this amazing winter spectacle.