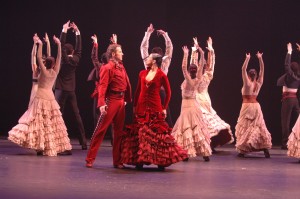 The Adrienne Arsht Center for the Performing Arts of Miami-Dade County and Canela Pura announce FLAMENCO FESTIVAL MIAMI 2011 featuring Spain’s foremost ambassadors of flamenco, BALLET NACIONAL DE ESPAÑA.  The full company of more than 40 performers will thrill South Florida with the drama and passion of one of Spain’s most famous artistic exports, February 23-26, 2011 in the Sanford and Dolores Ziff Ballet Opera House.

Founded in 1978 by the Spanish Ministry of Culture, BALLET NACIONAL DE ESPAÑA is a critically acclaimed company of the world’s greatest flamenco artists.  The company performs throughout the world, honoring Spanish culture through the preservation of flamenco and traditional Spanish dance, while still stepping into the future with a fresh, modern flourish.  BALLET NACIONAL DE ESPAÑA has performed the most emblematic Spanish dance works including Antonio Gades’ Bodas de Sangre, Pilar López’s El Concierto de Aranjuez, and Alberto Lorca’s Ritmos.  The company of more than 40 virtuosic performers has garnered multiple awards and accolades from New York to Japan to Mexico City, and now returns to Miami for the first time in more than eight years.

Artistic Director José Antonio first took the helm at BALLET NACIONAL DE ESPAÑA from 1986 to 1992, and then returned as director in 2004, imbuing the company with his sense of artistic daring and technical finesse.  A dance star in his own right, Antonio was a premier danseur with BALLET NACIONAL DE ESPAÑA for many years, then went on to establish two of his own dance companies and to serve as director for Centro Andaluz de Danza and Compañia Andaluza de Danza.  His many awards include the prestigious Medal of Honor bestowed by the Spanish Ministry of Culture.  Antonio has created choreography for dance luminaries including Carla Fracci, Julio Bocca, and the dancers of the Kirov Theatre.

BALLET NACIONAL DE ESPAÑA’s program for FLAMENCO FESTIVAL 2011 includes two spectacular repertory highlights.  La Leyenda, choreographed by José Antonio and Dualia by the award-winning choreographic team of Angel Rojas and Carlos Rodriguez, showcase the full company in exciting new works.  La Leyenda is Antonio’s affectionate tribute to the Spanish dance legend Carmen Amaya.  Best known for her dramatic onstage presence, Amaya exuded strength and intensity, kicking up sparks with her quicksilver footwork.  However, Antonio knew Amaya personally as a sometimes fragile spirit, barely five feet tall, whose private moments outside of the spotlight posed a stark contrast to her public image as the universal symbol of the fiery Spanish temperament.  La Leyenda tells the story of one woman’s grandeur and solitude, honoring the humanity of the performer and her immortal legacy.  In Dualia, Rojas and Rodriguez breathe new life into traditional Spanish dance and culture, simultaneously honoring the deep roots of flamenco and infusing their choreography with the voice of the next generation.  Sensuous duets and rhythmic castanets shape this dramatic, visually stunning work.  In this rich, expressive program, BALLET NACIONAL DE ESPAÑA is flamenco at its fiercest.